The inside story of the Star Wars galaxy’s fan holiday.

Like anything that emerges from the collective passion of a group of people, the Star Wars fan holiday on May the 4th each year has no single point of origin. It has no official commencement year, no formal dedication. It is a grassroots phenomenon that now transcends the English language pun that inspired it. Around the world, “May the 4th Be With You” is more ubiquitously known as “Star Wars Day.”

The earliest uses of the phrase “May the 4th Be With You” that we have evidence for date from 1978, one year after the release of Star Wars: A New Hope. By then, Star Wars was firmly established within American popular culture and became “like a handshake,” as Professor Leo Braudy would later comment in the documentary, Empire of Dreams. That summer of ’78, clever newspaper writers used the phrase as a gimmick to mark Independence Day celebrations on the Fourth of July. “May the Force be with you,” as heard in A New Hope, had been appearing on licensed (and unlicensed) buttons, posters, and various items for months, enough to convince those writers that the joke would be well-received by their readers. 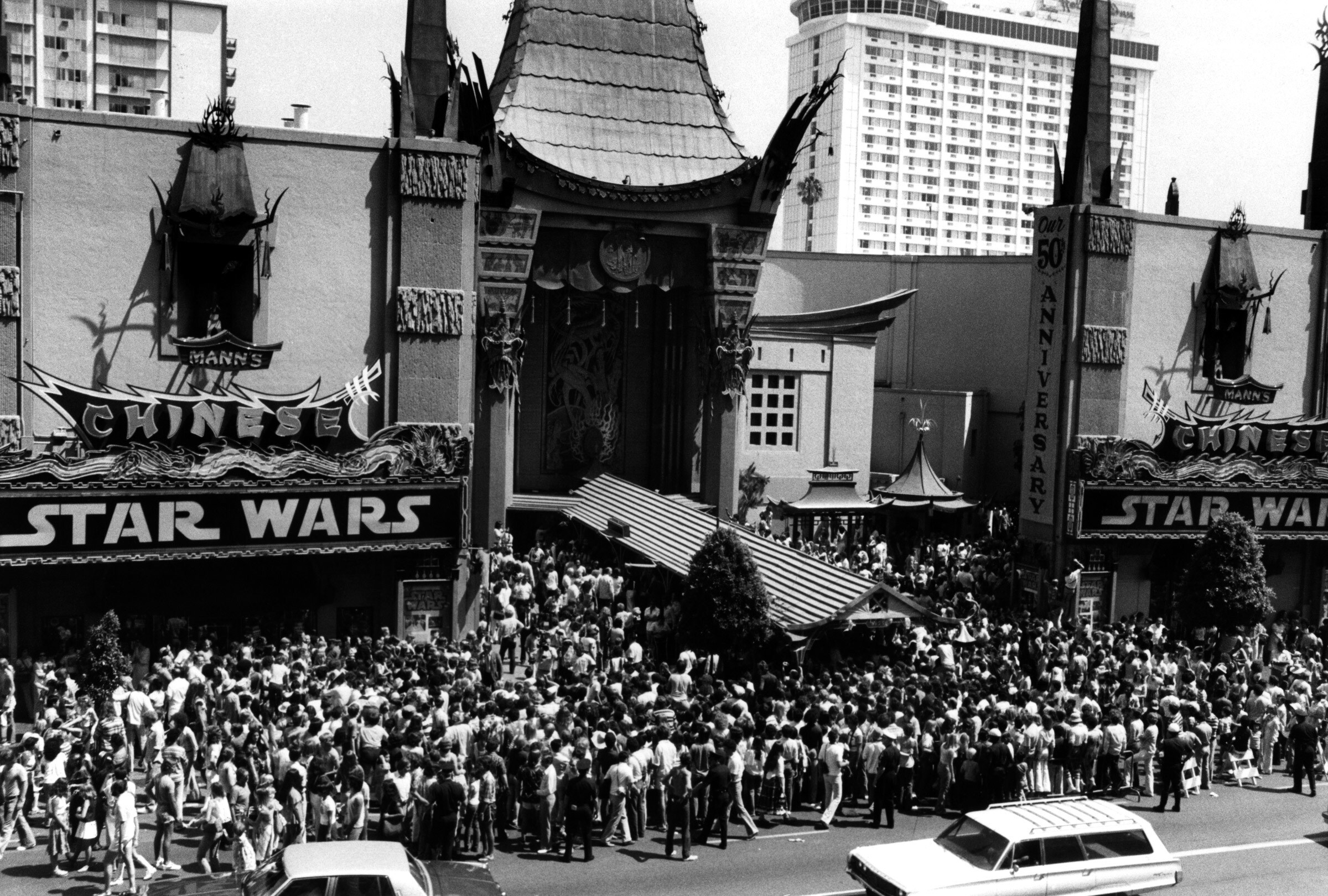 English-speaking audiences in the United Kingdom were familiar with it as well. It was on May 4, 1979, that the first known instance of “May the 4th Be With You” being used to mark the earlier date took place. Britain’s new prime minister, Margaret Thatcher, happened to assume office that day, and another clever newspaper writer for The London Evening News declared in a full-page ad: “May the Fourth Be With You, Maggie. Congratulations!” (Coincidentally, Star Wars: The Empire Strikes Back was in production at nearby Elstree Studios at the same time, and issues of the Evening News could have appeared in Lucasfilm’s offices.)

Another lesser-known instance came from within Lucasfilm in 1982. Randy Thom, who today is the director of sound design at Skywalker Sound and has been with the company for over 40 years, worked as a location sound recordist on Revenge of the Jedi (its title, of course, was later changed, and at the time of production it was known under the codename Blue Harvest).

Thom joined the production unit in northern California as they shot in the redwood forest doubling for the moon of Endor. May 4, 1982, happened to be a working day, and Thom recalled thinking of the pun on his own when contemplating the date. He shared it with others on the set, and would continue to write an annual message to the company declaring “May the 4th Be With You” for years to come. 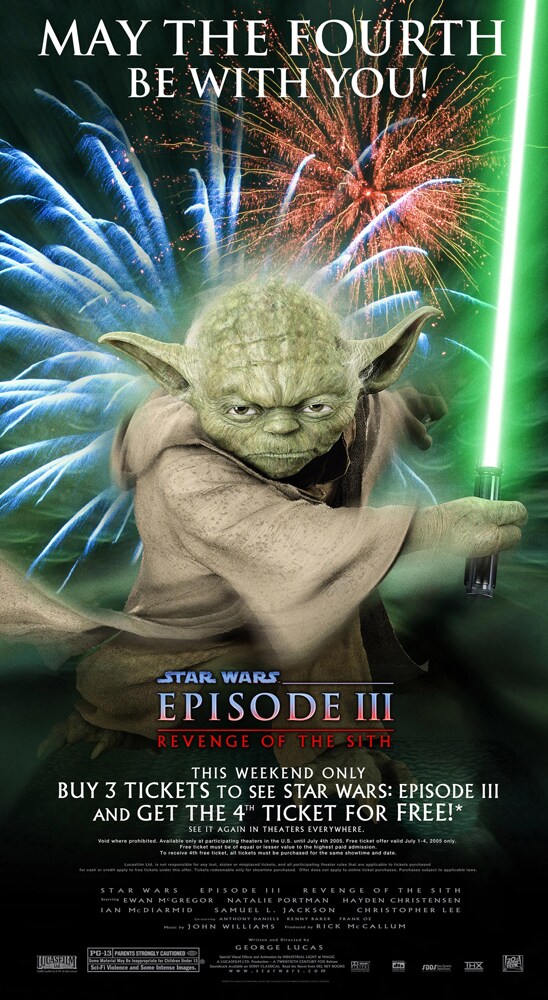 In ensuing years, evidence for use of the phrase in public or private is hazy. As recently as 2005, it was used once again in context with the American Fourth of July holiday. Star Wars: Revenge of the Sith had been released weeks earlier, and a marketing push to bring audiences back to theaters inspired a unique newspaper ad sporting Yoda, a background of red-white-and-blue fireworks, and “May the Fourth Be With You” (the ad was later made into a poster sold at StarWars.com).

As the laughable pun continued to circulate underground, an unofficial holiday emerged. Star Wars fans chose the day to hold themed parties or host community events and gatherings. Others simply used it as a time to revisit the films. It was not unlike other ways fans exercised their passion throughout the year, such as the popular “Blow Up the Death Star” watch-parties on New Year’s Eve. This point is essential because Lucasfilm cannot take credit for Star Wars Day. That belongs to the fans, along with the irresistible attraction of using the phrase to evoke laughter (or even an eye-roll) from bemused friends, relatives, colleagues, or even strangers on the street!

I can recall going into one of my high school classes on May 4, 2011. We were seniors, weeks away from graduation, and deep into the unmotivated stupor known as “senioritis.” Perhaps sensing our irreverent mood, the teacher had written “May the Fourth Be With You” on the whiteboard. Some classmates snickered at a reference to something as “nerdy” as Star Wars, but my friend and I laughed with sincerity.

Looking back, it doesn’t seem like all that long ago, but even as recently as 2011, we mostly kept our love for Star Wars close to the chest. It wasn’t something to wear on your sleeve, necessarily, for fear of being subject to the harshness of teenage criticism. We didn’t care what others thought about us, but like most adolescents, were desperate to avoid that kind of ridicule. 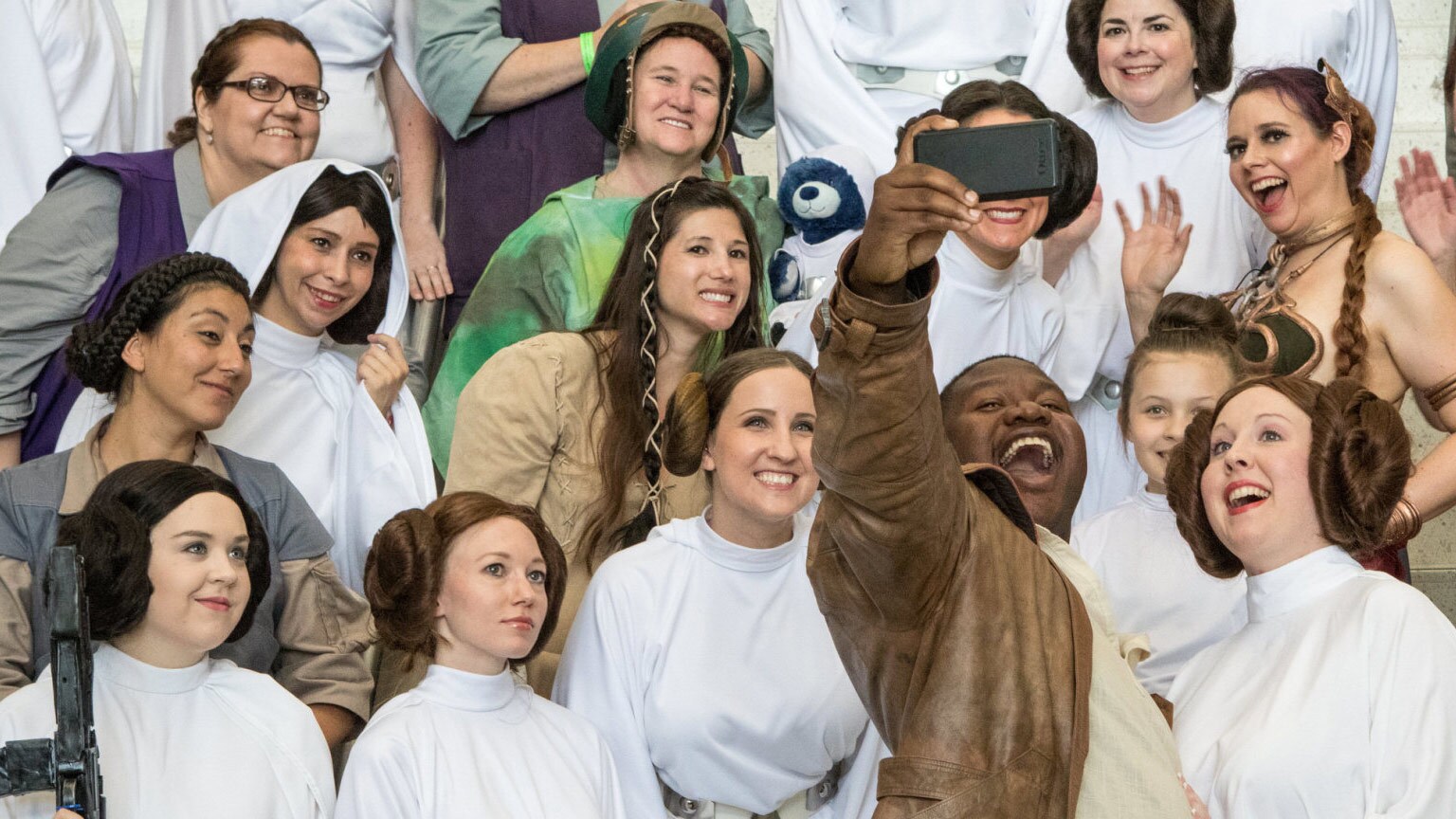 But that same year, Lucasfilm began to take a more active role in the unofficial holiday, helping sponsor and promote events and sharing resources for free use. We started to see “May the 4th Be With You” on local television news, at the grocery store, coffee house, bookstore, or sports game. Each time the holiday came back around, it felt like Star Wars was re-emerging in the mainstream, perhaps not unlike how it had become that “handshake” back in the late 1970s.

Lucasfilm’s acquisition in 2012 and the subsequent announcement of new films going into production came like lightning from a clear sky for a lot of us fans. Star Wars was center stage again, and everywhere we saw T-shirts and bumper stickers and advertisements. The new films, series, books, comics, and games have done a great deal in fueling this surge of relevancy, but I can’t help but feel that the grassroots rise of Star Wars Day indicated that it was going to happen in some form anyway. The timeless appeal of Star Wars matched with the passion of its fans is a guarantee.

star wars day May the 4th Be With You