The Expedition 45 astronaut discusses his crew's popular Star Wars-themed poster and much more!

Lindgren, a NASA astronaut, is set to launch for the International Space Station this May as a part of Expedition 45. Last week, as is customary for ISS Expeditions, NASA released a specially-themed poster commemorating the event. This one (see below), however, features the crew dressed as lightsaber-wielding Jedi, a starfield backdrop with an X-wing-like satellite, and a very Star Wars-esque title: Space Station: Expedition XLV The Science Continues. Lindgren, who came up with the idea for the image, is pictured in the lower left...with a red lightsaber. StarWars.com caught up with him to get the full story on the poster and to talk Star Wars science.

StarWars.com: So, how did the poster come to be?

Kjell Lindgren: It was definitely a team effort. I proposed the idea and the layout to our graphic artist, Sean Collins. He was totally excited about the idea, and so, then we had a friend of his loan us quality Jedi costumes. The photographer did a great job capturing the image, and then Sean put it all together. We have all these movie-themed posters, and I'm not sure why, but we've never done a Star Wars poster.

StarWars.com: You'd think that you would have.

Kjell Lindgren: I know! It seems like it's one of the most popular science-fiction films out there. But I'm a big Star Wars fan, so I proposed it to the rest of the guys, and they were fine with it. I thought it would be a fun way to honor the franchise and also remind the public of the science that we're doing on the space station.

StarWars.com: Now, in regards to the poster. You're holding a red lightsaber. Correct?

StarWars.com: You're aware that that's a Sith lightsaber? Is there something you want to tell us?

Kjell Lindgren: [Laughs] That's really funny. I specifically asked our graphic artist to give me a red lightsaber, and then I recommended that he give Scott Kelly a purple one, because Scott has that steely-eyed, wise Mace Windu thing going on. Kimiya [Yui], my Japanese crew mate, is trained in Kendo. So, when we were doing the photo shoot, I asked him to strike a Kendo pose. I think the silver lightsaber works in a samurai, katana kind of way. Then Sean filled in the rest of the lightsaber to make it visually interesting.

I loved the comments [on the poster], and your comment, as well. "You know you're holding a Sith saber, right?" And, of course, I knew that was the case.

StarWars.com: Well, it just makes me worried for your fellow astronauts.

Kjell Lindgren: [Laughs] I don't know that the lightsaber color reveals the soul of the barer. Darth Vader's my favorite character by far.

StarWars.com: You're not helping yourself by saying that.

Kjell Lindgren: [Laughs] Well, I actually got to meet David Prowse. I grew up in England, and he was the guest of honor at one of my Cub Scout banquets. I got to meet him, and you've got James Earl Jones' booming voice. What's not to like? 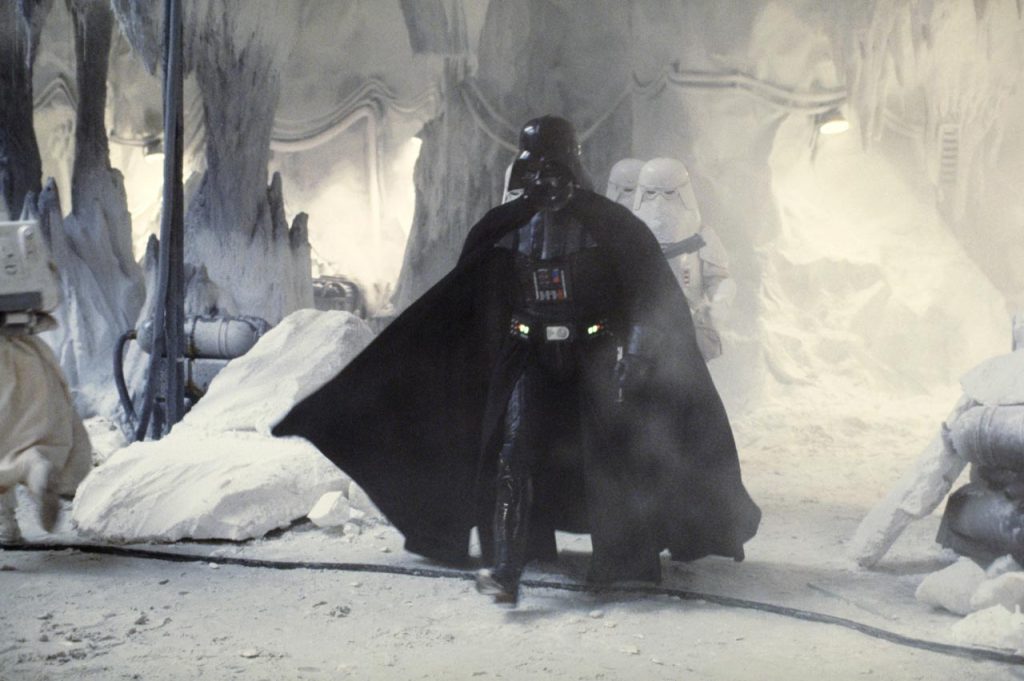 StarWars.com: Did Star Wars influence you in your career path? And if so, was it the technology, the idea of exploration, or another aspect of the movies?

Kjell Lindgren: Star Wars is definitely the first movie I remember seeing. I must have been three or four at the time. I'm also just a big fan of science fiction and speculative fiction, in general. And my father was in the Air Force, and I grew up on Air Force bases. I think all those things, taken together, influenced my desire to become an astronaut. It's what I wanted to do for as long as I can remember. I think Star Wars, just the story, of course, captures the imagination. And then also, the technology and the idea of living in space and doing all those things is very exciting, as well. I've never let go of that.

It's interesting, because Star Wars is a cultural touchstone, and we're in a generation of astronauts now that saw A New Hope, The Empire Strikes Back, and Return of the Jedi when they were little kids. Star Wars is one of the many reasons that I became interested in space flight.

StarWars.com: Are we on track for any Star Wars technology? Like, when will I own a lightsaber, is what I want to know.

Kjell Lindgren: Boy, that would be cool. And very dangerous. [Laughs]

StarWars.com: Sure. I probably should not own one, even if they existed.

Kjell Lindgren: [Laughs] I have no idea. But we're doing some amazing things. The Navy has an operational laser defense system. It's pretty amazing, the things we've come up with even since Star Wars first came out.

StarWars.com: So, you're going to the International Space Station. Star Wars has its own famous space station called the Death Star. Are there any similarities between those two that we should know about?

Kjell Lindgren: As far as I know, we do not have a exhaust port that proton torpedoes would cause it to blow up. Though, I don't know that the International Space Station would be able to fend off any kind of proton torpedo at all.

StarWars.com: As long as it can't destroy a planet.

Kjell Lindgren: [Laughs] No, we don't have that capability.

StarWars.com: For people who don't know, what do you do on the International Space Station?

Kjell Lindgren: I'll be up there for six months; two of the guys that I'll be working with will be up there for a full year. We are very, very busy up there. The space station is a designated national laboratory.  There will be over 240 different experiments going on, at least during the time that I'm up there. So, I would say a good part of our time every day is spent doing experiments and research. We do a lot of preventative maintenance on the space station and housekeeping, and any time things break down, we'll do corrective maintenance. We get to do a couple of space walks. We have commercial partners that are delivering cargo, so we get to use the robotic arm to capture those vehicles. Hopefully, some day, we can upgrade from the robotic arm to a tractor beam.

It's very busy but incredibly rewarding. To be working in weightlessness, to learn how to live in this weightless environment, and just to look back at the Earth in all its beauty.

StarWars.com: I feel like NASA and Star Wars share a major theme, which is exploration and being open to new ideas. Would you agree?

Kjell Lindgren: Yeah, I think so. I think the big difference is that, in Star Wars, people are already living in space and working. We're just, right now, taking our first footsteps...

Kjell Lindgren: [Laughs] Really, into that larger world of becoming a space-faring species. Star Wars makes it look so easy, of course, to get from one place to another or just to fly around in space. As we all know, it's an incredibly difficult thing to do. But we're doing it, and we've been doing it for 15 years. We've had people living on the space station continuously for 15 years, doing research, and figuring out those things we need in order to explore deep space. So, I think that movies, and the fiction that surrounds Star Wars, is inspiring in that way.