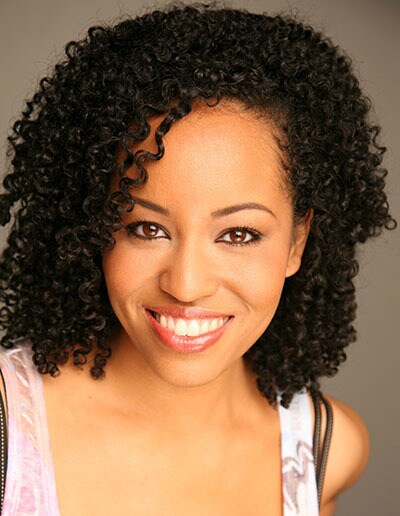 As the story of the Onderon rebellion in The Clone Wars reaches its conclusion this weekend, the character of Steela Gerrera has emerged as a breakout star. Evolving from green rebel-in-training to full-fledged, inspiring leader, Steela has earned a place in the pantheon of classic Star Wars heroines. (Don't be surprised to find a Steela or two ringing your doorbell this Halloween.)

A lot of the credit for the believability of the character's rise -- and her overall likeability -- goes to Dawn-Lyen Gardner, the voice of Steela. StarWars.com recently caught up with Gardner over e-mail to chat about taking on such a big role, what it means to play a Star Wars heroine, and why being identified with Steela Gerrera for life isn't a bad thing. 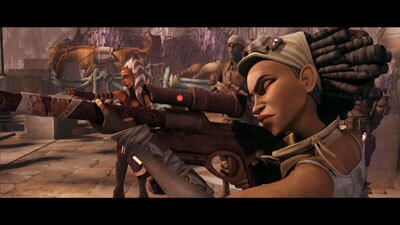 StarWars.com: How did you get the part of Steela?

Dawn-Lyen Gardner: My first answer is that the Voiceover Gods smiled upon me! No, really, it was an audition process; but I think as an actor, you almost never know why or how you actually got the part, so it really can feel like a beam of light hitting from above when you do. And it's really funny; when I auditioned for the role, I had no idea that it was for The Clone Wars. Because of confidentiality of the show's storyline, the actual audition material had lines from the script, but all of the names of characters were changed. And even the name of the show was kept under wraps -- which was sort of a great gift, actually. I think if I had known that it was The Clone Wars, it might've added this sense of pressure to my audition, you know? And without that, I just saw Steela as a girl I could identify with -- a regular girl, fighting for what she believes in.

StarWars.com: Did you know just how big a role she would have in not just one episode, but an entire arc?

Dawn-Lyen Gardner: I had no idea! I was sort of shocked when I got the call -- first, to find out that it was The Clone Wars, and then second, to hear that it was more than one episode. Again, it was like this huge gift just dropped from the sky!

StarWars.com: What was the actual recording like? Was it a different experience from other voice work you’ve done?

Dawn-Lyen Gardner: It was amazing -- everything about it. First of all, the producing and directing team were fantastic to work with: fun, professional, relaxed yet focused. They created this easy comfort, especially for me. It can be intimidating to be a new person walking into a show that has such an established cast and history together, but that wasn't the case at all here. Everyone was completely welcoming, so open, so cool to work with. And also, Andrew Kishino [the voice of Saw Gerrera, Steela's brother] and I were friends before the session, but we had no idea that the other had been cast. It was a wonderful surprise to walk in and see him -- and then to spend the next three hours in this great sibling rivalry with him, while fighting to save Onderon in the middle of a war. Such a blast.

Also, for a lot of the sessions, the cast recorded together. That doesn't always happen, and when it does, it can be such a gift. The scenes begin to feel really alive when everyone is in the same room. Plus, getting to hear and see all of these masterful actors do their work live was totally thrilling! Andrew and I would walk out of sessions and say to each other, “Can you pinch me, is this really happening?”

How I learned of Steela's storyline was really cool too. Oftentimes in voice-over, the first time you see the entire script is at the actual recording session, and then usually, you have time to sit and read the script, and highlight your lines and so forth. That was the case here -- and it was funny, as the actors are all sitting and silently reading through the script, every now and then you'd hear a really quiet, “Ohhhhhhhh...” or “Oh, wow...” or “Oh, no!” I was literally finding out what happened next in Steela's storyline almost as it was happening. And that was really exciting.

StarWars.com: There’s a big tradition of strong women in Star Wars. Were you conscious of that going into this, and did it inform your performance? Because Steela fits right in with Leia and Padmé. She may even be tougher.

Dawn-Lyen Gardner: Wow -- well, first of all, thank you for lumping Steela in with those ladies! That's really great company! But yeah, you know, I did think about that. After getting the role, I really went back to all of the Star Wars women and sort of aligned myself with them, if that makes sense. There is this willingness to risk that they all have: to fight for what they believe in, to take action for their beliefs. And there is a confidence too, a determination; not only that they will succeed, but that they will be heard... Or that they will make themselves heard, even in the face of great opposition. I love that about Steela. You totally get the sense that this girl can and will, literally, change her world.

StarWars.com: At the same time, there is a sensitivity to Steela, in how she interacts with her brother, and her clear attraction to Lux. As an actor, how do you go about balancing those two sides to a character?

Dawn-Lyen Gardner: That is the part of the work that excites me the most. It's why I chose to be an actor. Both parts exist in her and are totally true to her; one side is this strong, valiant, courageous woman, and the other is this vulnerable, sensitive, romantic girl. I think that's human, and it's what makes for great heroes -- the two sides don't cancel each other out, they inform each other. She is courageous enough to show her vulnerability, and yet compassionate enough to take action for her people. 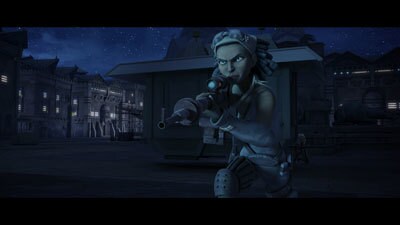 StarWars.com: What ultimately really impressed me about your performance as Steela was how well-rounded a character she was, because she does go from struggling rebel to full-fledged leader, and it’s believable. I’m wondering if you pulled from your own experiences or people you may have known to inspire how you portrayed that evolution.

Dawn-Lyen Gardner: You know, I thought a lot about great leaders, especially historical figures like Martin Luther King, Jr. and other revolutionaries, but I also looked at our world today, at the huge events happening all over the globe that are much like the rebel fight on Onderon. And what struck me the most was the reality that many of the people leading these movements are ordinary people. Even MLK was a preacher in a small church in Alabama. They were not giants of the world, or groomed from birth for leadership of that magnitude. I think that's part of what makes Star Wars timeless, is that understanding of heroism, of the epic. There are these huge stakes, and entire planets are at war. These are epic stories. And I think as an actor, it can be tempting to play a character as very grand, or someone who's totally ready to handle all of it. But really, many leaders and revolutionaries -- especially the extraordinary ones -- are regular people who find themselves in extraordinary circumstances, and step up to meet them. That's who I think Steela is. That's who I relate with: a regular girl asked to step into her own power, to lead others, and to stand for what she believed. And she did.

StarWars.com: How did you first see the episodes you’re in? What was your reaction?

Dawn-Lyen Gardner: Oh, my gosh. You know, I first heard that the episodes were airing from Andrew. He sent me a message on Facebook with a link to the preview of the episode that introduces us. And then later, when it became available, I watched the episode online at StarWars.com. I was pretty much jumping up and down with excitement when watching it! We had actually done the recording over a year ago, so it was even more thrilling to see Steela come to life onscreen after all of the anticipation, and especially with such power and beauty... I mean, she's gorgeous! Seriously, there have been so many times in watching the episodes, with her beauty and her fight and her heroism, that I have thought, “So...I wanna be her when I grow up...”

StarWars.com: How does it feel to know that to many people -- in a good way -- you’ll always be Steela Gerrera?

Dawn-Lyen Gardner: I can't even the describe the feeling, to have contributed this kind of character to this show in particular, and especially within her particular storyline. There is a socio-political tone in the rebels' fight that is totally relevant to current global events, and what I love most about The Clone Wars is that it trusts its audience, kid and adult alike, to get some really complicated dynamics. It assumes that its audience is smart enough, intellectually and emotionally, to follow it; and it doesn't dumb anything down, or shy away from it. That is really inspiring to me. And to be a character with that kind of integrity, who is central to that storyline, is such an honor and a privilege. It's an awesome feeling!