Ashley Eckstein speaks to StarWars.com about debuting the new collection with a little help from her friends.

Star Wars: The Clone Wars is turning 10, and Her Universe is celebrating.

Ashley Eckstein, voice of Ahsoka Tano on the beloved animated series and founder of Her Universe, is launching a new anniversary line for the show, with the designs honoring many of The Clone Wars' starring characters -- from Ahsoka to Captain Rex to Anakin Skywalker. And to kick off the range's launch, Eckstein called in some friends to help model the new offerings: the original cast of The Clone Wars, including Dee Bradley Baker (Rex), Matt Lanter (Anakin Skywalker), Catherine Taber (Padmé Amidala), James Arnold Taylor (Obi-Wan Kenobi), and Sam Witwer (Darth Maul). StarWars.com caught up with Eckstein to discuss the collection -- which includes items for both men and women -- and what it was like reuniting with the cast for the shoot, which you can check out below! San Diego Comic-Con attendees can purchase the line starting today at the Her Universe booth (#2913-T in the Lucasfilm Star Wars Pavilion), and it's also available online at HerUniverse.com.

StarWars.com: The Clone Wars obviously means so much to fans. At what point did you decide to celebrate its 10th anniversary with a new line? And what did you want the line to say?

Ashley Eckstein: Every year for San Diego Comic-Con, we design a new collection. Our collections are usually inspired by an anniversary or upcoming movie. We start designing our collections about nine months in advance of the launch and I knew I had to dedicate our collection to the 10th anniversary of Star Wars: The Clone Wars. On August 15, 2008, The Clone Wars debuted in movie theaters and on October 3, 2008, the series premiered on television. I wanted the collection to represent the characters from our beloved series. I was inspired by the character's costumes and I was thrilled to design a collection for men and women. The women's designs are under our Her Universe label and the men's and uni-sex designs are under the new Our Universe label. The collection is a mix of dressy and casual and I hope fans will be able to show off their love for The Clone Wars with this collection!

StarWars.com: Can you talk a bit about taking these animated looks and bringing them into the world of fashion? It seems like a tricky thing to do.

Ashley Eckstein: We specialize in what I like to call "everyday cosplay." As fans, we like to show off our love of our favorite characters but we can't walk around in a costume everyday. I love to look at costumes, whether they are animated or not, and figure out how I can translate it to fashion. Some costumes are more difficult than others to design but I always love a challenge. 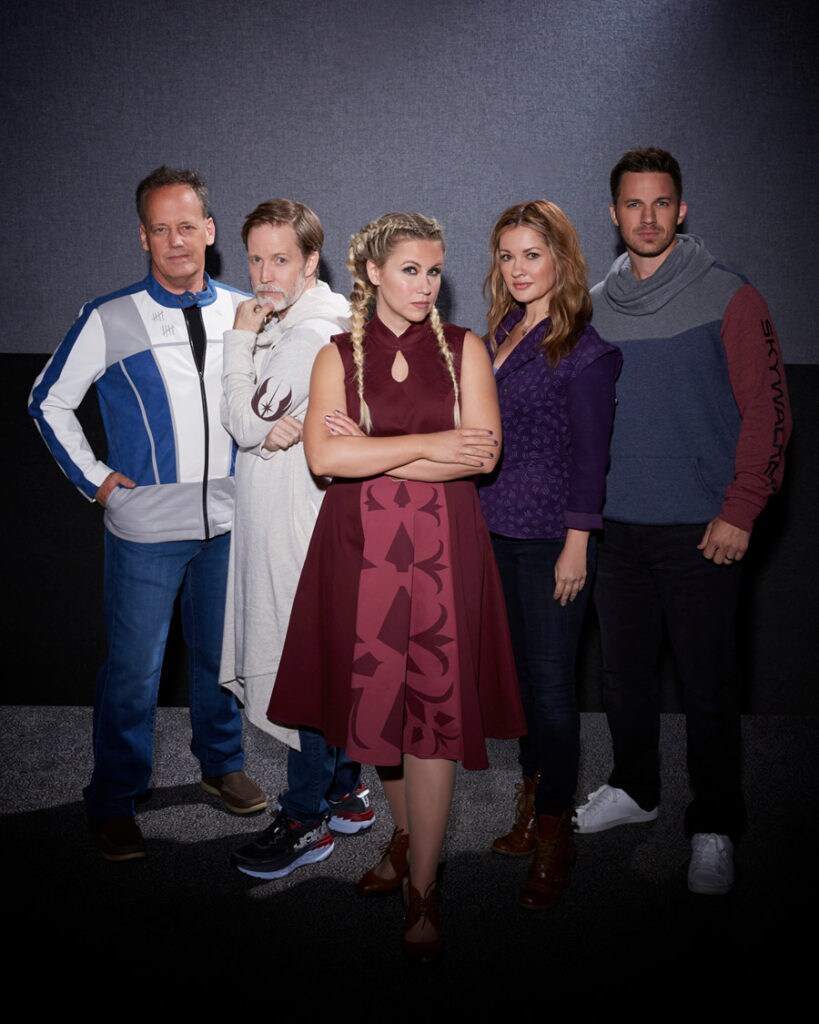 StarWars.com: The photos of the original cast modeling the clothes are fun but also kind of powerful, just by seeing you all together. What was the shoot like? And what did everything think of their clothes?

Ashley Eckstein: I had my cast mates in mind when I was designing this collection and I knew that I wanted them to model with me for this photoshoot. Most of us have known each other since 2006 and we've become a family. We had so much fun at the shoot! Due to a scheduling conflict, Sam had to come in prior to the cast but I got to see him and catch up, which is always fun! While Darth Maul and Ahsoka are at odds, Sam and I are good friends! When Matt, Dee, James, and Cat came in, it was just like old times. Dee and James are always making me laugh. Just like Ahsoka and Padmé, Cat and I are great friends with lots of respect for each other. Matt brought his wife Angela and new baby MacKenlee with him to the shoot and we were all so excited to see them! Everyone really seemed to like their clothes, but what really stood out to me was how supportive they all were of me, Her Universe and now Our Universe! They have been with me from the beginning of my Her Universe journey and they've supported me from day one. I feel the same about them and they will always have my continued support.

StarWars.com: You're going to be part of The Clone Wars anniversary panel this week. What's it been like for you, being part of this show, being Ahsoka, and being part of Star Wars for 10 years?

Ashley Eckstein: This is not really a short or easy answer because The Clone Wars and Ahsoka changed my life for the better and I am forever grateful. Before The Clone Wars came out, Dave Filoni told me that my life would change and I didn't quite believe him. It wasn't until The Clone Wars movie came out in movie theaters that I understood what he meant. Within a few weeks I had fan mail from all over the world from fans welcoming me to the Star Wars universe. I was beyond humbled and instantly knew that this project and this character would be different. Ahsoka Tano was the first female Jedi that was a lead character in a Star Wars series or film and that was groundbreaking at the time. The fact that Anakin Skywalker had a Padawan and his Padawan was a 14-year-old GIRL sent shock waves through the universe. I understood the importance of having a character like Ahsoka. Ahsoka's presence meant that little girls everywhere would have a more inclusive environment thanks to her, and Ahsoka also represented change. In many ways, she paved the way for the strong female characters we have today. Being the voice of Ahsoka has inspired me, Star Wars fans all over the world have inspired me, and I've changed the way I look at life because of Ahsoka and being a part of the Star Wars universe.