Stephen Hayford makes art with toys. Yes, he possibly has the best job ever. He combines Star Wars action figures with handmade sets and miniature props to create dioramas for Lucasfilm and other companies. Stephen doesn't remember the first time he saw Star Wars, but he does recall the third time he saw A New Hope. He was six years old and went to Cherry Knolls theaters near the Southglenn Mall in Colorado. He says, "It was the cantina scene which altogether possessed me. I was an absolute alien nut. When the Sears cantina set came out, I think Snaggletooth was in my pocket wherever I went. I made up stories for all the cantina aliens. Star Wars inspired me to create."

I talked with Stephen about his work, his methods, and more. 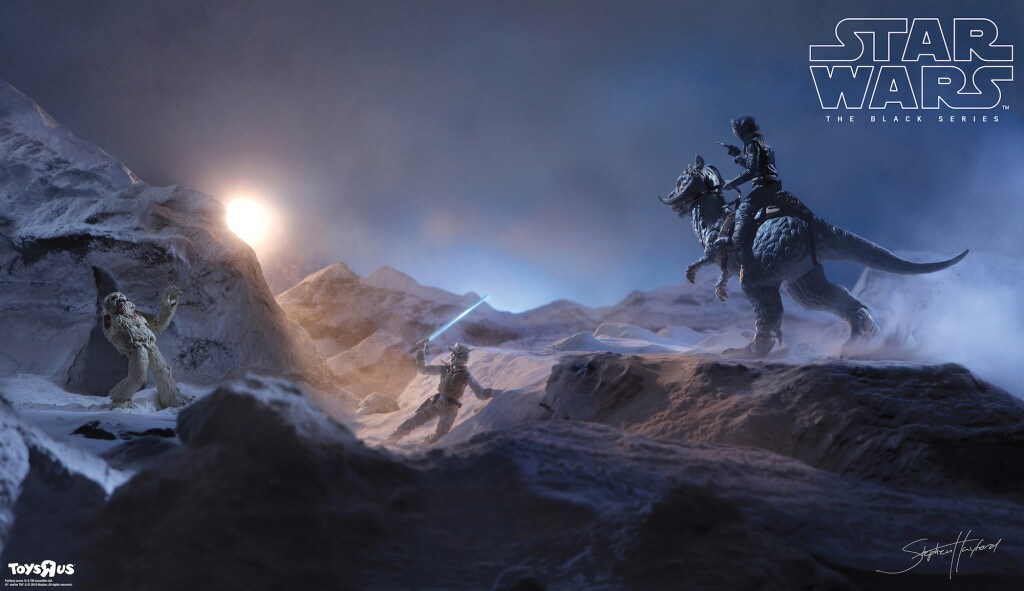 StarWars.com: Your career has changed course significantly over time. Do you build and photograph dioramas full time now and how does your previous photojournalism work affect your creations?

Stephen Hayford: Yes, I'd say my career has taken some strange turns. I spent 20 years in photojournalism. I started customizing action figures and building dioramas in the late 1990s as a way to relieve stress, since I covered a lot of death and destruction. Then I was doing art commissions alongside my news photography career until leaving newspapers in 2008 to dedicate myself full time to diorama art.

My photojournalism background influences my artwork significantly. Photojournalism is all about sociology and psychology, observing the behaviors of others. There are very subtle nuances to human interaction that speak volumes. I've always tried to find ways to translate those subtleties to action figures to make a statement without hitting the viewer over the head with it.

I rely heavily on minor gestures and the compositional storytelling that shaped my photojournalistic work. 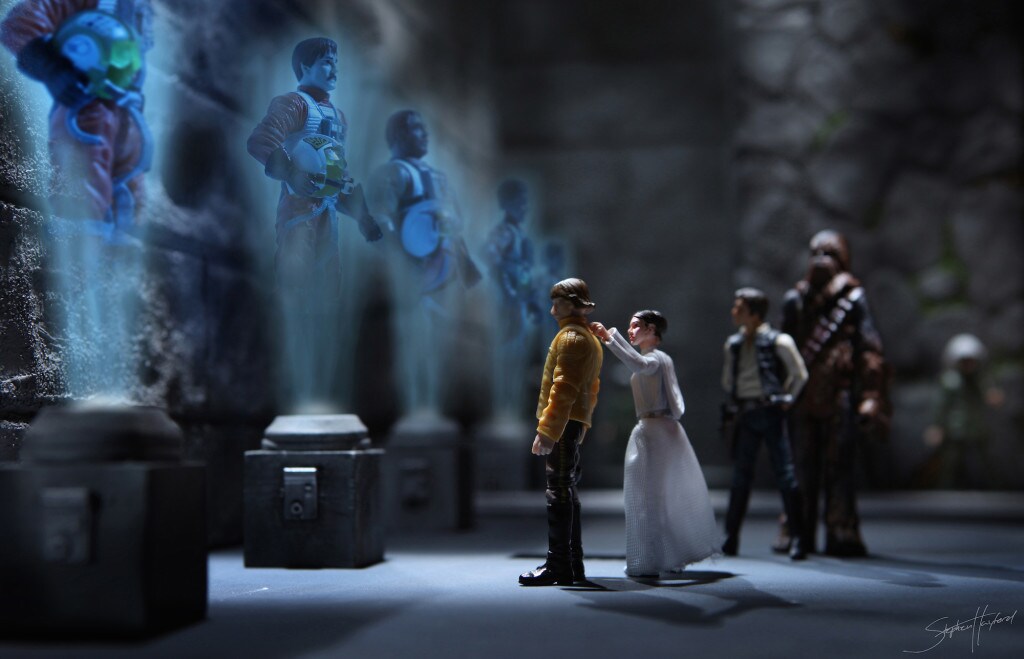 StarWars.com: Tell me about the first diorama you did for Lucasfilm and how you started working with them.

Stephen Hayford: That's a long story. I had been doing Star Wars-themed holiday images by commission and sharing with fan sites since 2003. In 2006, as I was on medical leave after a major heart surgery, I was contacted by Steve Sansweet, who was working with Lucasfilm at the time. He and Pete Vilmur were working on The Star Wars Vault together and wanted to use "Dad Carves the Turkey,” a popular Thanksgiving image of mine, in the book.

Steve liked my work and did a lot to introduce me to other Lucasfilm licensees. But it wasn't until 2010 that I became contracted with Lucasfilm when Pete was working with content for Star Wars online. My first image for them is still one of my favorites and became a Star Wars Weekends exclusive print years later. It was "Labor Day: Endor.” It features stormtroopers and biker scouts enjoying a day off behind the Imperial bunker while Ewoks lurk in the shadows.

There are lots of tiny holiday familiarities happening which became more fun with Imperial armor. Like the idea of a stormtrooper awkwardly balancing a flimsy paper plate on his lap as he enjoys barbecue. I loved that project.

StarWars.com: Your dioramas are incredibly detailed. What kind of planning happens before you dive in and how do you keep everything in place while the diorama is in progress?

Stephen Hayford: It's interesting because very few people, looking at a final image, really think about every step, or varied skill, that goes into making the final photograph.

My first step is pre-visualization, which, to the untrained eye looks a lot like napping. But I have a very vivid imagination and it operates best when I'm horizontal, slack-jawed and drooling. When I have the image in my head, I leap up and do a very rudimentary sketch to work out the composition, dimensions, and spacing of the elements.

Since I'm working in three dimensions, I'll often then translate that sketch into a paper mock-up to determine the size of the props, dimensions of walls, break-away points, etc. Then I'll scour reference material for what props and adornments will be appropriate for the scene. Behind-the-scenes film stills are my favorite.

Next comes the engineering step: Problem solving the designs of the props to create them in three dimensions most cost effectively. That leads to designing props on the computer to be laser cut, hand cut, or sculpted from clay. That leads to the building and shaping phase. This is where I usually endure minor injuries from X-Acto blades or super gluing my fingers together, not to mention splashing caustic chemicals on myself.

After the building phase comes the paint phase. This is when the objects that looked cool now suddenly have life. The paint phase can be very complex with base coats, details, washes, weathering, faux finishes, etc.

With all the set pieces complete, the staging phase begins. This is when I set up the diorama with all the props, substrate (sand, baking soda, crushed leaves, etc.) and characters (which stay in place with nails glued to the bottom of their feet). But even this phase is tricky because setting up to be seen through a lens is different then how you see the scene with your naked eye.

When the diorama is set, characters are in place, then it's time to set the lights (yes, I kind of sang that like The Muppets theme). I've created a variety of specialized snoots and other light modifiers to work with tight spaces on miniature subjects. Photography begins and I shoot hundreds of frames playing with different light treatments or practical effects.

After photography, I move into postproduction. Because of limited focal range when photographing miniatures, I often shoot many different focal points and composite them in the computer to get more expanded depth-of-field. This is also the phase for adjusting colors and contrast to help make an image pop.

That's just about the whole process. There are lots of little nuances in every step that can make or break a project...or deadlines.

StarWars.com: The scenes you compose always tell a story. What advice would you give to diorama artists to help them add personality to their work?

Stephen Hayford: I definitely recommend people watching. Look up from your smartphones and pay attention to how people behave. There are tiny motions or gestures that say volumes. And those subtleties help viewers relate. 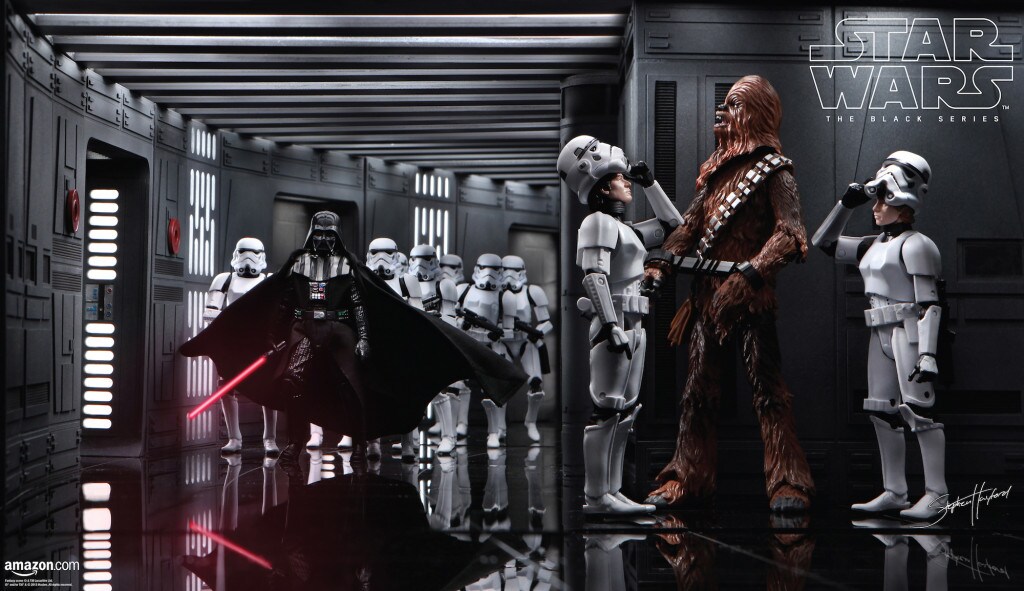 StarWars.com: Of all the Star Wars dioramas you've completed, which was the most tedious?

Stephen Hayford: The toughest pieces to do are ones that include small details in tight spaces. So, easily the most tedious piece I've made is a Death Star scene that includes five levels being seen at once. Each level is six inches tall and seven and a half feet long, bent at the left and right. So, it was 37.5 feet of Death Star walls I had to create in two weeks. I lost a lot of skin from my finger tips in that time.

Luckily, all the pieces were laser cut, so the tedium was only in the design and the construction. Death Star walls are something I have to build frequently and I used to cut all those panel details by hand. My minor OCD couldn't handle the inconsistency. It would have taken me three months to complete that same scene if I had to cut by hand. And my career would have been sidelined by carpal tunnel.

Still, it's hard to complain when you get paid to play with toys. There are worse jobs.