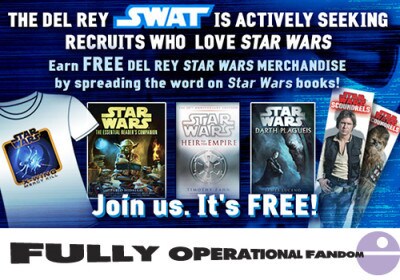 Did anyone else participate in summer reading programs as a kid? Sitting down with an engaging book was enough of a reward then (and still is), but I remember feeling excited and incentivized by earning points for stickers, bookmarks, and the best prize of all -- free pizza. Nothing could keep me from burning through stories when there was pizza on the line. Del Rey's Star Wars Action Team (SWAT) has brought those feelings back with their Fancorps Community. I might not get pizza, but I can earn neat Star Wars loot and connect with fellow fans while I'm racking up points. I call that a win.

SWAT was announced last summer and has been up and running for about eight months; they've recruited over 1,500 fans. Programs like this are one of the reasons Star Wars fandom is terrific. Sure, Del Rey gets word-of-mouth advertising from those participating, but it's also another way to build and reinforce the community. I talked with some fans enrolled in SWAT to get their feelings about the project.

I'm envious of the rewards Angel Bailey, a.k.a. Zxielle, has earned with the program -- Boba Fett would be, too. Check out this list of signed books she received for free just for executing orders: The Making of Star Wars, The Making of Return of the Jedi, The Making of Revenge of the Sith, and The Essential Guide to Warfare. She says she still can't believe she owns them. But she deserves them. She’s put in the time, joining SWAT's ranks on day one because she saw it as a way to connect with other fans.

And connect she has! Angel's made friends through SWAT and is looking forward to meeting them at Star Wars Celebration Anaheim next year. "I am always recommending SWAT whenever I meet someone interested in Star Wars. I have met so many wonderful people across the country who share my passion. And you do become friends even though there is a friendly competition to get to the next level ahead of them!  I love logging in every day to see what my new friends have posted. The orders are easy and really fun to do. And the rewards are things you just can't get anywhere else."

Revan97 couldn't resist joining once he saw the post about the action team on StarWars.com. He's reading the books anyway so why not get cool stuff for doing so? His favorite novel from Del Rey is Star Wars: The Old Republic: Deceived. He's earned many of the same rewards as Angel (and then some) and encourages others to join: "First of all it's free and in addition to that it's fun and easy to complete orders, fun to climb towards the top of the leader board and best of all the rewards are more than cheap trinkets."

Those fancy rewards are definitely an incentive. ZekkainaSolo says she's a bookaholic in general and was excited about getting free books. She also appreciates the different tiers of prizes: "Because of where I live, I don’t have the opportunity to meet Star Wars authors or go to large events like Celebration or other conventions, so having the opportunity to earn the “smaller” rewards like bookmarks and posters was also attractive." She was thrilled to receive the "Making of..." books especially since the titles weren't accessible to her otherwise (she's a student on a budget). She noted it’s also great because the books were signed and they're her first Star Wars-related autographs.

Zekkaina thinks the program works for all kinds of fans whether they just like books or only the Star Wars films: "If you’ve never read a Star Wars novel in your life, this program could encourage you to do so, post a book review and earn points –er, credits. There are also activities such as taking photos, making book trailer videos, reading/performing book excerpts, sharing posts on Twitter and Facebook, or my personal favorite, creating art based on Star Wars characters! An unexpected surprise I had was the connection to community. Other than my sister, I’ve never really known any Star Wars EU [Expanded Universe] fans, so it’s neat for me to interact with other EU lovers in Del Rey’s SWAT!"

It's simple to sign up for SWAT, and yes, it's completely free. Once you've created an account, you'll get a list of orders (don't worry, none of them are numbered 66). The tasks are worth points according to their difficulty. It goes from simple orders such as sharing links to Del Rey Star Wars covers on Twitter to more time-consuming activities like coordinating with a local library or bookstore to throw a launch party for a Star Wars book. You'll accumulate points along the way, and then you can redeem them – just like you would with tickets at an arcade. It's fun and easier than hunting down a place to play skee ball.

Do you participate in SWAT? Let us know in the comments!