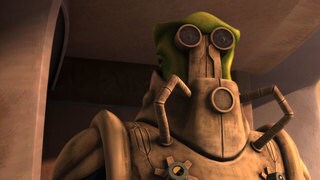 The foreman of the Techno Union, Wat Tambor was one of the original and most fervent Separatist leaders, pledging his loyalty and his battle droid armies to Count Dooku at a pivotal meeting on Geonosis. Later in the war, Tambor was appointed emir of Ryloth. His occupation was a cruel one, in which Tambor stripped the Twi'leks of whatever valuables he could find, then bombed their villages. The lead engineer of the Techno Union, Wat Tambor controlled the most advanced military assets in the galaxy. At a secret meeting on Geonosis, Tambor pledged those assets to Count Dooku’s Separatist movement.

Tambor supervised the brutal Separatist occupation of Ryloth, starving its people and bombing villages while looting as many valuables as he could. His greed proved his undoing, however, as he was caught by Republic forces.

Freed from Republic custody, Tambor immediately rejoined the Separatist cause. But the war was near its end. Tambor sought refuge with his fellow Separatists on Utapau before being transported to Mustafar – where he would finally have to answer for his crimes.