This week saw the release of my latest book, Star Wars: The Essential Reader’s Companion from Del Rey Books, a hefty guide to Star Wars prose fiction – all the novels, young reader novels and short stories that have come out in the over-35 years since the very first Star Wars novelization appeared in bookstores in late 1976 (yes, months before the movie came out). To do something like that requires a lot of pages, and a lot of words. The final book is 486-pages long, and covers over 145 full-length novels, over 100 juvenile novels, and over 170 short stories. 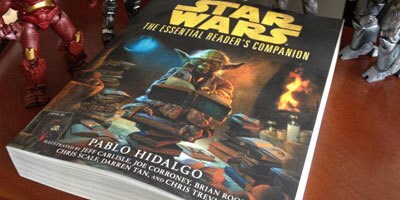 But, of course, it doesn’t cover everything. Some things didn’t make the cut – and some made it very, very close.

Why isn’t everything in there? Because that would have taken a book much, much bigger in size. To include comic books, roleplaying game sidebars, children’s books, choose-your-own-adventures and everything else that didn’t quite make the cut, would have taken a book at least three times the size, I’m guessing. Something about the size of The Complete Star Wars Encyclopedia, an 11-pound behemoth that ended up being a three-volume titan with a listed retail price of $125. Given that we wanted The Essential Reader’s Companion to appeal to newcomers as well as experts, that’s a scary proposition for a novice reader who so far has been scared by the enormity of the Expanded Universe. Keeping it under $30 was important. Size, in this case, definitely mattered.

So, why not have comics? Comics represented the single biggest piece that we could cut. When I first started writing the Companion, I started – naturally – with Chapter One. Because the book follows the fictional chronology (as opposed to publishing history), this chapter was all about the Old Republic era. As I was getting a feel for writing this book, I did include comics – titles like Knights of the Old Republic, The Old Republic: The Threat of Peace and Jedi vs. Sith. When I finished writing that chapter, it ended up being nearly half the allocated word count of the entire book... and I still had seven more chapters to go! Clearly, comics weren’t going to be included. At least, not as full-fledged entries – we did include select comics series as sidebars when they pertained to novel storylines.

So what went next? The children’s storybooks published by Random House, Penguin, DK and others weren’t going to make the cut, as much as I would have loved to include Fuzzy as an Ewok, or Watch Out, Jar Jar! That said, I knew the Jedi Prince series from the early 1990s had such a cult following that we decided to include a sidebar on it.

Stories with variable outcomes – “choose your own adventure,” “solitaire adventures” and “decide your destiny” books – didn’t make the cut because of their very malleable stories and the questions they raise as to what the true “canon” version of events are.

Fictional narratives that wound their way through gaming guides and sourcebooks were also left out. We focused on discrete stories. Though, that said, things like The Farlander Papers, The Stele Chronicles and Pax Empirica – The Wookiee Annihilation each got dedicated sidebars. Ah, the sidebar. Such a handy tool to say, “Oh, this doesn’t actually fit into the format of the book, but it’s important to bring up anyway.”

Any Borderline Cases? Yes. Two. And I agonized over them and cut them for the needs of space and on the grounds of definition. The Secret Journal of Doctor Demagol was a tough case. Written by John Jackson Miller, it was published on StarWars.com Hyperspace back in April 2010. What made it difficult to categorize was the way it was inventoried on StarWars.com – the website tagged it as “source material.” And, after reading it, it did come off more as source material rather than a traditional short story. So, it didn’t make the cut – though, since we know there are many Knights of the Old Republic fans out there, Del Rey nonetheless posted it online as part of their Star Wars shorts collection launched in conjunction with the Essential Reader.

The other one that I lost sleep over was Lumrunners. Published in the Star Wars Adventure Journal issue #9 (February 1996), it was written by John Beyer and Wayne Humfleet. It definitely reads more like a short story – but it too is a source article. It has the fictional narrative broken by source material time and again to explain what lum-running is, and how to use it in your roleplaying game. As such, it didn’t fit the admittedly hazy definition of short stories. Why this one bugged me more than anything is that I’m Facebook friends with Wayne Humfleet, and I couldn’t bring myself to break the news to him. So I guess this blog post is the coward’s way out.

Anyway, there’s some insight into The Essential Reader’s Companion. I hope you like it! If you’re in the Bay Area, I’ll be participating in Star Wars Reads Day alongside Haden Blackman at the Barnes and Noble in Corte Madera from 1 to 3pm this Saturday. Then on Sunday, I’ll be doing a reading in San Francisco as part of LitQuake, at 2 pm at the Variety Preview Room. Hope to see you there!