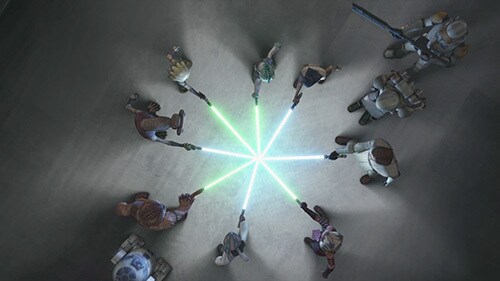 
Lucasfilm Animation's Star Wars: The Clone Wars won two Emmys for its stirring fifth and final season at the 40th annual Daytime Entertainment Emmy Awards. Last night, the show took home the award for Outstanding Special Class Animated Program, with Star Wars: The Clone Wars creator and executive producer George Lucas accepting. (The award was presented by Carrie Fisher, who enthusiastically shouted, "Yes!" when announcing the winner.) Lucas, joined onstage by supervising director Dave Filoni, producer Cary Silver, and line producer Athena Portillo, said, "This is especially important to me...This is my first Emmy and the second award I've ever won." He went on to thank the academy, Filoni, Silver, Portillo, the show's writers, actors, and finally, the animators, or "all those poor souls who toil over their computers." 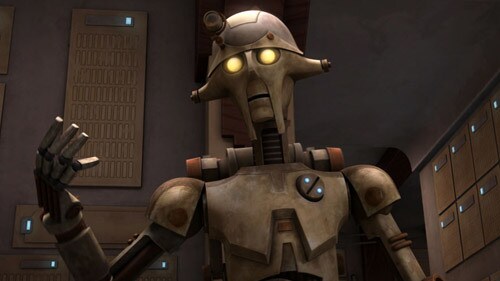 
On Friday, guest star David Tennant was honored in the Outstanding Performer in an Animated Program category for his turn as Huyang, an ancient droid wise in the ways of lightsaber construction. Tennant voiced the character in two episodes, "A Test of Strength" and "A Necessary Bond," which were part of a four-part arc featuring Padawans on a Jedi rite of passage that does not go as planned. For more on Huyang and Tennant's appearance on Star Wars: The Clone Wars, watch StarWars.com's exclusive featurette, "From McQuarrie to Tennant: Creating Huyang."

Supervising director Filoni released the following statement regarding the wins on Facebook:

Everyone, as you know tonight Star Wars: The Clone Wars won an Emmy for Outstanding Special Class Animation and David Tennant won Friday for Outstanding Performer in an Animated Series for his work as Huyang.

These awards represent the hard work of everyone who has worked on The Clone Wars' 5 seasons. Whether you worked on Clone Wars in the Bay Area, Singapore, Taipei, or Tokyo we all did this together.

Star Wars fans, your support and dedication to The Clone Wars helped champion our cause year after year. This win is for you as well, thank you from everyone at Lucasfilm, now let's celebrate!!