Han Versus a Military Tribunal in the Novelization of Solo: A Star Wars Story - Exclusive Excerpt

In this exclusive preview from the forthcoming adaptation, a young Han Solo struggles with the Empire's rules as a cadet in the Imperial Navy.

We always knew Han Solo was a maverick, a talented pilot who preferred to fly by his own rules and for his own profit.

When author Mur Lafferty brings Solo: A Star Wars Story from the screen to the page with the novelization of the hit summer film, we'll get an even more in depth look at the formative events that shaped the young scoundrel.

Today, StarWars.com is bringing you the first look (and listen) from the forthcoming novel, Solo: A Star Wars Story. In this exclusive excerpt from the expanded adaptation, Han gets into trouble with the Imperial Navy and faces a military tribunal... 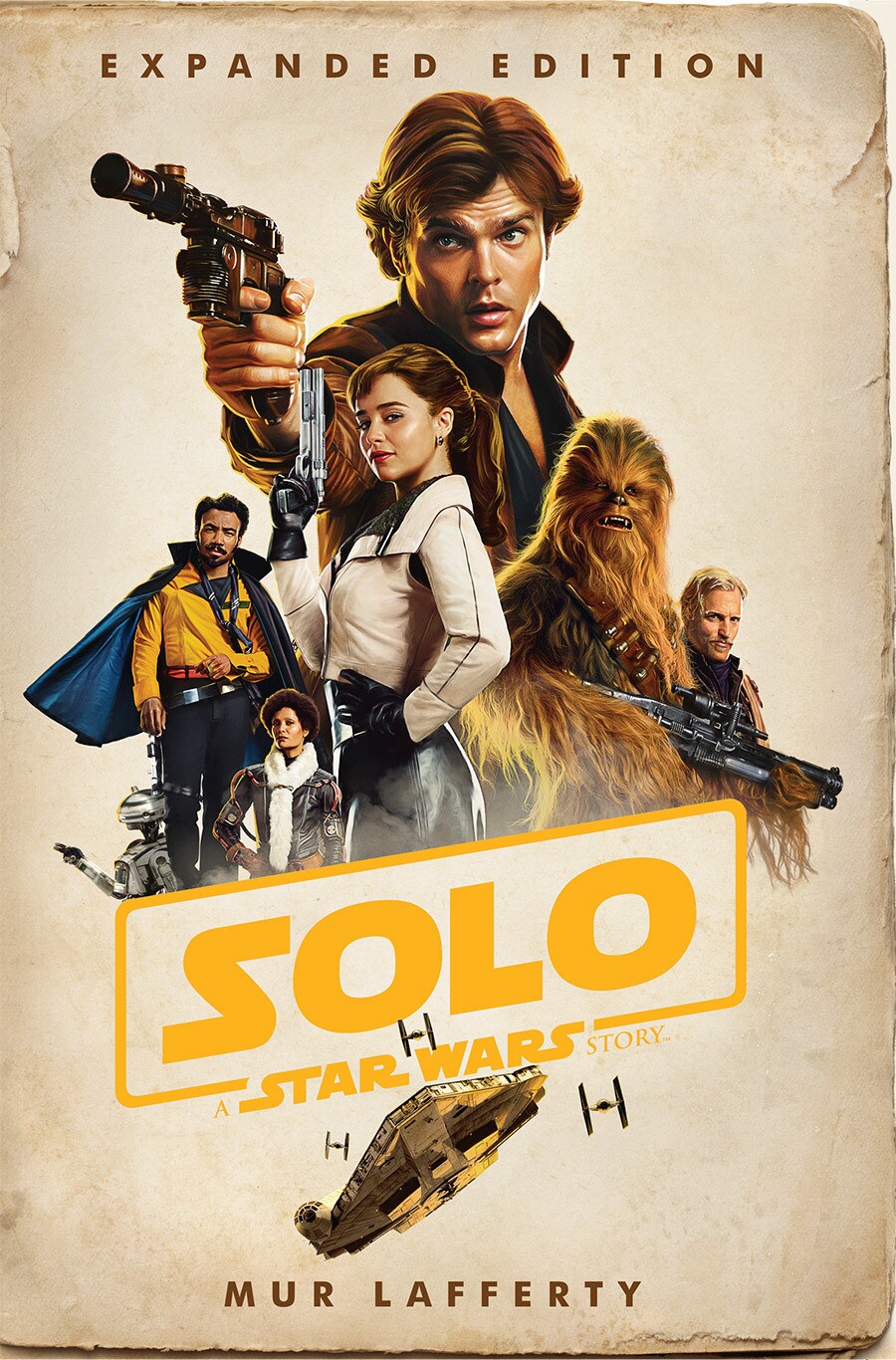 Han knew that voice, and it always made him grind his teeth.

Flight Officer Ubbel was constantly demanding they play it safe. Han privately thought that if Ubbel had been in charge, the Empire would have encompassed one of the smaller skyscrap­ers on Coruscant instead of half the galaxy.

“I can take them faster than the squad can!” Han shouted.

Han actually liked Onyx 2, his friend Cadet Lyttan Dree. The number of other cadets who liked him was frankly diminish­ing. His natural charm always drew them in…but then most people would quickly figure out that being close to him would probably reduce their chances for advancement. Dree, or Onyx 2, managed to be a good pilot, Han’s friend, and still fol­low the rules. Han had always meant to ask him how he did that, and now he might never get the chance.

Han peeled off from the formation and chased the Headhunt­ers down, feeling much freer now that he could fly where he wanted to and not worry about the others in formation. In the­ory he could understand the need for a formation, but in prac­tice he always preferred to worry only about himself and his own ship.

He accelerated, watching the raiders flank Onyx 2 as he tried to outmaneuver them. Han’s helmet squawked again, and he turned down the audio as Onyx Leader was shouting at him to return to formation. Then his droid started fussing at him.

Imperial droids were the worst. The White Worms hadn’t had much use for droids, so Han hadn’t grown up with them behind doors, underfoot, and always politely, infuriatingly, tell­ing him how wrong he was.

His ship’s intelligence, MGK-300, was such a droid. It thought that since it was integrated directly into his ship, it knew more about the ship than he did.

He’d already long since had enough of MGK’s so-called guidance, but it still beeped furiously at him that they were making the squadron weaker because of his actions.

Han ignored it. If the droid wasn’t telling him something was wrong with the ship, he didn’t see a need to listen to it.

He got one of the raiders in his sights and fired, nearly miss­ing, but clipping a wing. The ships separated, one keeping up with Onyx 2 and one turning to pursue Han.

Now he saw the point of the squadron formation. Han wheeled and turned, heading back, and met head-on his own fellow ca­dets flying toward them. He ducked to slide under them and they fired. He cheered them on, but then felt the ship heave under him as something behind him exploded.

His Infiltrator went into a spin. Han fought for control, try­ing to tune out the squeals and beeps coming from behind his head.

“Yeah,” he said, “I know we lost the reverse thrusters! Thank you!” The ship started to spin, the universe whirling madly around him, the Star Destroyer’s docking bay a rapidly moving target.

MGK beeped what Han knew was standard emergency pro­tocol at this point—which was essentially giving up. He shook his head. “Not ejecting! I can make it back to the docking bay!”

The droid made known its firm disagreement, beeping and booping faster and faster as it began to panic.

These machines were distracting, irritating, and useless. How did anyone fly with this nagging going on? “You know what?” he asked, flipping an emergency switch to power down the droid. MGK couldn’t distract him now, and he could finally focus.

As if the droid were trying to get the last word in, the control panel sparked and spit when he touched the switches. Pain flared in his hand and he yelped, shaking it. Had MGK done it on purpose? He couldn’t tell. It was pointless to wonder, be­cause the docking bay was suddenly much, much closer.

He struggled to maintain control and decelerate. At the last possible moment, he yanked the control yoke upward, managing to slip through the artificial atmosphere of the docking bay cleanly, without clipping any of the sides—which Han thought was pretty impressive. His ship hit the floor and bounced, ca­reening him into three tethered TIE fighters. His chin hit the control panel and he saw more stars, wondering briefly if he had flown straight through the ship and back into space. Then he heard the alarms and remembered where he was.

No one was impressed with the fact that he’d saved Onyx 2.


Commodore Almudin’s round face seemed to eclipse the rest of the tribunal. Other high-ranking important types were there, but Han could only see the ridiculous round face, even as he struggled to take the man seriously. The commodore outranked him (actually, everyone on the tribunal outranked him), and rumor had it that he’d had an amazing flight record in his day. But right now he flew a desk and had the exciting job of sen­tencing real pilots in military tribunals.

Han’s chin still throbbed from the quick work the medical droid had made of his gash, and he ignored the other aches from the crash as he stood straight.

But the officer’s face really was irritating.

The other officers on the tribunal, two women and a man, looked both bored and annoyed, as if in their minds Han was already sentenced to death and they were just waiting for lunch.

“Cadet Solo,” the commodore said, like he had before, with that tone of less than disgust, “I still can’t decide if you’re brave or stupid.”

He shrugged. “I like to think I’m a little of both, sir.” He paused. He could never get the ranks right. Was this man a moff? He’d better cover all of his options. “I mean, Moff.” The man’s face didn’t change. “Sir Moff.”

That finally broke him. He scowled at Han and said, “It’s ‘Commodore,’ and if you think having a smart-ass attitude is the way to go here, you’re sorely mistaken.

“Why don’t you tell us what allegedly happened here?” he continued, indicating a screen that had lit up. It was flanked by two Imperial guards, Lieutenants Tag Greenley and Bink Otauna. Once upon a time, Han had attempted to befriend them, but they turned out to be such colossal screwups, Han started to avoid them before they got him or themselves killed. Still, he needed all the friends he could get. He gave them a little wave and a grin. They looked back at him wryly and said nothing.

The screen lit up and Han saw his own ship, leaving forma­tion to pursue. He felt a surge of pride as he always did, seeing from the outside how free he looked. He realized he was just admiring himself, and he cleared his throat and pointed in the general direction of where Onyx 2 was being pursued.

“Onyx Two was flanked by Headhunters.” He’d reported all of this. He had no idea why they needed his comments again since he’d already given them all the information in his report. “If I’d followed Command’s directive and returned to forma­tion instead of going after ’em, he’d be dead now.”

This tribunal was ridiculous. Couldn’t they see that he’d saved their second in command?

“There is no place for maverick heroics in his Emperor’s navy.”

Han held his hands up, as if fending off praise. “Trust me, I’ve got no interest in being a hero, Commodore, what I—”

The commodore cut him off abruptly. “Well, congratulations. You’re not one. This tribunal, me in particular, finds you guilty of disobeying a direct order, and you are hereby reassigned to the infantry. Report for immediate transfer to Mimban.”

He wasn’t getting kicked out. Relief flooded him. He smiled. “Okay. I thought it was gonna be way worse.” He cocked his head and inquired, “And roughly, when do you think I’ll be fly­ing again?”

Commodore Almudin smiled, and there was nothing friendly about it. “Oh, we’ll have you flying in no time.”

And you can pre-order your copy of the Solo: A Star Wars Story novelization now!