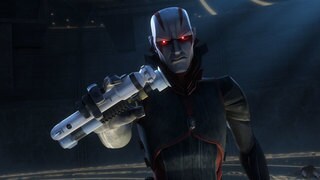 The Son was an embodiment of the dark side of the Force who dwelled on Mortis during the Clone Wars with his sister, the light-sider known as Daughter, and the powerful Force user known as Father, who tried to keep them in balance. Son sought to escape Mortis and wreak havoc in the galaxy, trying repeatedly to lure Anakin Skywalker to the dark side by changing form, possessing Ahsoka Tano and finally by showing Anakin a vision of the terrible acts he would commit. His efforts ultimately failed, culminating in his death along with those of Daughter and Father.