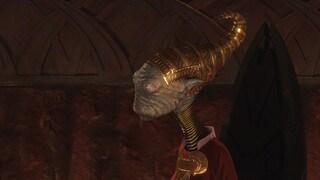 Shu Mai is a female Gossam from planet Castell who uses her influence as the Presidente of the Commerce Guild to gain a seat on the Separatist Council. She pledged her support for the Confederacy in secret meetings on Geonosis just prior to the start of the Clone War, but it was this allegiance that eventually led to her death on the planet Mustafar at the hands of Darth Vader.