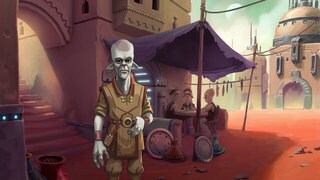 Dyro acted as a representative for the Er'Kit people and sought the help of Saponza and his partner in ridding the world of a terrorist sect of a slavery operation on Er'Kit, known as the Blood Dawn. After the campaign and eventual defeat of the Blood Dawn, Felldor relayed his gratitude but offered no alliance with his new associates. Upon return to the world, Saponza and his partner discovered that Dyro had been taking part in a power struggle, and was manipulating both the Alliance and the Empire to serve his greedy purposes.