The nomadic Death Watch terrorists from Mandalore kept up their fighting skills by blasting apart dwindling reserves of captured droids. The cruel warriors would delight in picking apart the writhing automatons. Death Watch would then rebuild the droids, without bothering to wipe their memories of their torturous demise. Battle droid 513 consisted of parts cobbled together from a Retail Caucus droid, a standard battle droid, and a crab droid. Its deep-voiced vocodor begged for pity or release from its merciless masters. 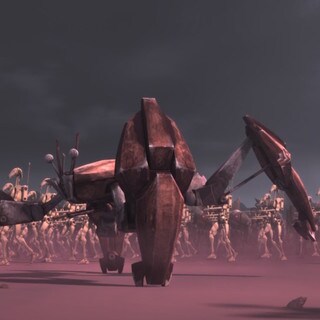