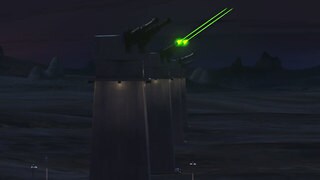 Among the Empire's most powerful defense weapons, the anti-air turbolaser tower are designed to thwart incoming fighter attacks. Featuring two cannons, it is notable for its range and precision. The Empire commonly lined anti-air turbolaser towers together to create a blockade. Its biggest weakness, however, is a lack of protection from ground-based assaults.