The Mirialan Padawan to Luminara Unduli, Barriss Offee preferred learning and studying ancient Jedi texts in the Temple to war. This mindset, while noble, led her down a dark path that saw her betray friends and commit terrible acts. 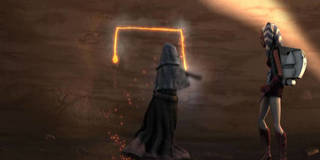 Barriss Offee came of age during the Clone Wars, seeing the reality of war -- and all that it did to the Jedi and the galaxy -- firsthand. In an important mission on Geonosis, Barriss and Ahsoka Tano covertly entered the planet’s droid factory with one goal: to destroy it. Ever studious, Barriss memorized all 200 junctions in the Geonosian’s underground catacombs. She led the way, using her lightsaber to cut a passageway into the maze, and bravely sliced into a super tank after a skirmish with guards and droids. When all seemed lost, the two Padawans were willing to sacrifice themselves to destroy the reactor. They ultimately accomplished their mission and survived the blast, returning to their Masters and proving to be able warriors.

In the aftermath of their mission, Barriss and Ahsoka were next charged with transporting medical supplies to Dantooine. Parasitic brain worms, however, had infested their shuttle, turning several clones into mindless killing machines. Attempting to save their clone friends and themselves, the Padawans split up, with Ahsoka trying to contact others for help and Barriss looking to disable the ship’s thrusters. But things did not go according to plan: Offee walked into a trap and was infected. When the two friends next met, Barriss fiercely attacked Ahsoka, and they dueled. Ahsoka managed to escape long enough to contact her Master, Anakin Skywalker, and learn that extreme cold would weaken the brain worms. Desperate to stop the creatures, she ruptured the craft’s cooling system, releasing frigid air throughout the starship. The possessed Barriss attacked Ahsoka once more, the brain worm grotesquely emerging from her mouth. Finally, the starship was boarded by a Republic ship -- with Master Kit Fisto discovering the still forms of Ahsoka and Barriss covered in frost. They were saved, and Barriss and the other infected clones completely recovered.

As the Clone Wars continued, many citizens came to see the Jedi not as peacekeepers, but as enablers of war. Protests were often held throughout the galaxy and on Coruscant, until finally, the Jedi Temple was bombed in an act of terrorism. Someone framed Ahsoka Tano for the crime, causing the Padawan to flee from custody in an effort to clear her name. All along the way, Barriss was there to help her friend, leading Ahsoka to different clues and places -- until Anakin Skywalker discovered the truth. It was Barriss herself who orchestrated the bombing and framed Ahsoka. Anakin dueled Barriss on Coruscant, and eventually placed her under arrest. Brought before a military tribunal led by Governor Tarkin, she admitted her guilt, but held steadfast in her belief that the Jedi and Republic had lost their way.