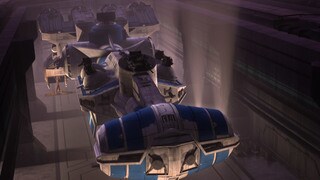 The Liberator was an Alderaanian crusier and the command ship of Sato, leader of the rebel fleet. It was nearly caught in the tractor beam of a Star Destroyer during a surprise attack from the Empire, but some last-minute heroics from the Ghost crew freed the Liberator, allowing it to make the jump to lightspeed and escape.