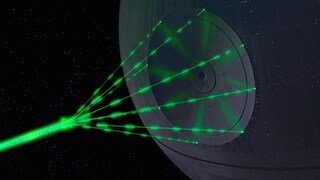 Each of the Empire’s Death Stars was built around a terrifying weapon – a superlaser array capable of destroying a planet. According to legend, the ancient Sith used massive kyber crystals to create superweapons; during the Clone Wars, the Geonosians revived the superlaser design. The Empire constructed the first Death Star in secret for nearly two decades before using it to destroy Alderaan; the second Death Star boasted a more powerful superlaser, with improved targeting sensors and power regulators.