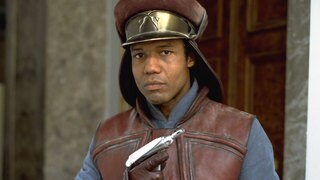 Queen Amidala's loyal protector during the Trade Federation invasion crisis was Captain Panaka. Panaka was often referred to as "the quickest eyes on Naboo" for his attention to detail and selfless dedication to the safety of the Queen. Panaka commanded a team of Royal Palace Guards and Security Troopers stationed throughout Theed. During the Trade Federation invasion, Panaka stayed close to the Queen, ensuring her protection from the Neimoidians' plans. His loyalty was such that he would openly question the strategy of Jedi Knights if he thought it would somehow endanger Amidala.

Padmé Amidala was a courageous, hopeful leader, serving as Queen and then Senator of Naboo -- and was also handy with a blaster. Despite her ideals and all she did for the cause of peace, her secret, forbidden marriage to Jedi Anakin Skywalker would prove to have dire consequences for the galaxy. 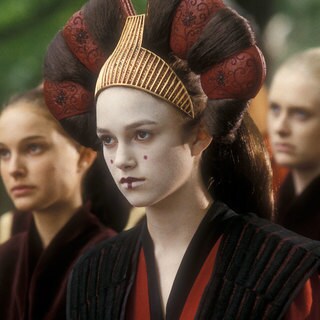 Sabé is the most important of Queen Amidala's royal retinue of handmaidens. During crisis situations, Sabé and Amidala switch roles. Sabé becomes a decoy, disguised as the Queen, while Amidala adopts a simple gown of a handmaiden, and goes by her less formal name of Padmé Naberrie. When in this role, Sabé and Padmé secretly communicate with subtle signals as to not divulge their true identities. During the Trade Federation invasion of Naboo, Sabé posed as the Queen on several occasions.

A venerable if maverick Jedi Master, Qui-Gon Jinn was a student of the living Force. Qui-Gon lived for the moment, espousing a philosophy of "feel, don't think -- use your instincts." On Tatooine, Qui-Gon discovered a young slave boy named Anakin Skywalker who was strong in the Force. Sensing the boy's potential, Qui-Gon liberated Anakin from slavery. The Jedi Master presented Anakin to the Jedi Council, but they deemed the boy too old to begin training and dangerously full of fear and anger. They refused to allow Qui-Gon to train Anakin, but rescinded their decision to fulfill Qui-Gon's dying wish.

An idyllic world close to the border of the Outer Rim Territories, Naboo is inhabited by peaceful humans known as the Naboo, and an indigenous species of intelligent amphibians called the Gungans. Naboo's surface consists of swampy lakes, rolling plains and green hills. Its population centers are beautiful -- Naboo's river cities are filled with classical architecture and greenery, while the underwater Gungan settlements are a beautiful display of exotic hydrostatic bubble technology.