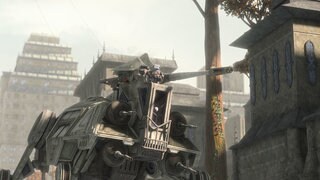 The principal battle tank of the Grand Army of the Republic, the All Terrain Tactical Enforcer features six articulated legs for propulsion. The legs are low to the ground, which reduces the walker's top speed but does provide it with increased stability. The body of the walker consists of two armored halves connected by a flexible sleeve that increases its mobility on the field. The walker is truly all terrain, able to climb sheer surfaces and survive in the vacuum of outer space. The front of the walker is lined with four ball-turret laser cannons, while a single heavy projectile cannon is turret-mounted on the vehicle's dorsal surface. Its rear fire arc is protected by a pair of laser cannon turrets. Though the walker's armor can easily deflect small arms fire, tanksmasher rockets can pierce an AT-TE's armor and destroy its complex propulsion mechanisms. 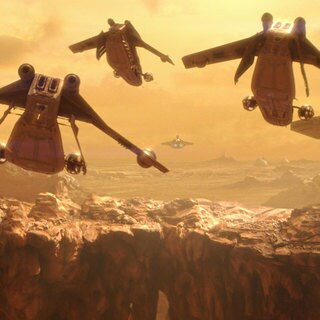