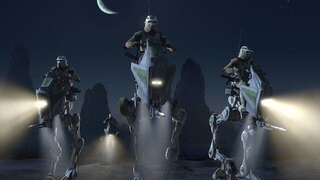 While clone troopers were best deployed in large numbers, articulated battlefield armor such as this Republic scout walker transformed a single clone trooper into a formidable anti-infantry unit. Designed primarily as a reconnaissance vehicle, this two-legged open-cockpit walker is nonetheless swift and heavily armed, letting a clone trooper cut through battle droids easily. It was employed in such campaigns as the Battle of Kashyyyk. It was the precursor to the All Terrain Scout Transport seen during the Galactic Civil War.