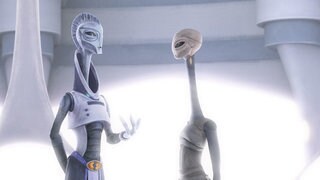 A beautiful sylph-like Kaminoan, Taun We is the administrative aide to the Prime Minister of Kamino, Lama Su. When Obi-Wan Kenobi arrived at the rain-swept platforms of Tipoca City, he was greeted by the gentle Taun We. Taun We explained that the Kaminoans had long been expecting the arrival of a Jedi envoy, since a Jedi representative, Master Sifo-Dyas, commissioned a clone army a decade earlier. Kenobi bluffed his way into the heart of the cloning operation, and had the naive Taun We introduce him to the original source of the clones, Jango Fett. Obi-Wan meets Jango Fett on Kamino and attempts to gain valuable information about the clone army.