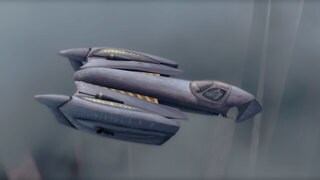 General Grievous piloted this customized Belbullab-22 starfighter, notable for its two sets of triple laser cannons, speed and agility. In the final days of the Clone Wars, Grievous flew the Soulless One to Utapau, and tried to escape the planet aboard his fighter. But Obi-Wan Kenobi killed the Separatist general before he could get away. After Obi-Wan was betrayed by his clone troops, he flew Grievous’s fighter to a rendezvous with Bail Organa and Yoda.