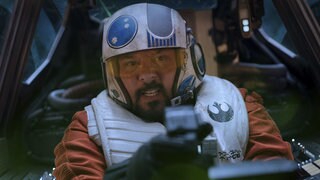 Temmin “Snap” Wexley is a pilot in Blue Squadron known as the best recon flier in the Resistance’s Starfighter Corps. Snap grew up on the Outer Rim world of Akiva, the son of a rebel Y-wing pilot who flew in the Battle of Endor. His recon flight of Starkiller Base helps the Resistance come up with a plan to destroy the First Order superweapon.