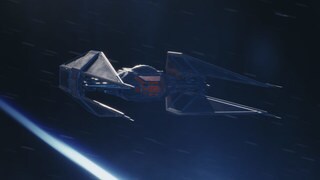 Reminiscent in design of the Empire's TIE interceptor and Darth Vader's TIE advanced, Kylo Ren's TIE silencer is an angular fighter equipped with laser cannons and missile launchers. Ren is an expert pilot -- thanks to skills passed down from his father -- which he puts to use in exploiting his ship's speed and ferocity. There is no other First Order craft like the TIE silencer, and it is an effective tool in Ren's mission to destroy the Resistance.