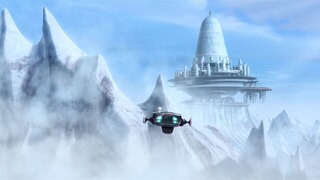 A frigid mountainous world, Scipio houses one of the primary vaults of the powerful InterGalactic Banking Clan, an institution critical to the economic health of the galaxy. During the Clone Wars, former Scipio Senator Rush Clovis discovered that the Banking Clan’s leaders had been funneling money to secret accounts, and the organization was in dire financial straits. Clovis exposed the corruption and became the Banking Clan’s leader, but he had been ensnared in a Sith plot. The Separatists invaded Scipio, leading to a swift Republic counterattack and a Separatist withdrawal. Clovis died in the fighting and Supreme Chancellor Palpatine took over the Banking Clan.