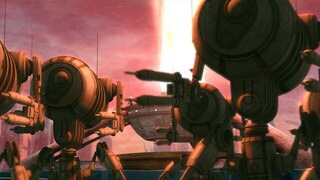 The Retail Caucus is one of the myriad corporate entities attracted into the command structure of the Separatist Alliance by Count Dooku's promises of unlimited pursuit of profits. Like its fellow corporations, the Retail Caucus brought with it its private droid army, adding its distinctive battle droids into the swelling ranks of the military commanded by General Grievous. Retail Caucus droids are towering brutes with barrel shaped bodies and spindly limbs. Each of its short arms terminate in a pair of laser cannons.