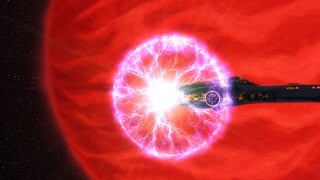 A gargantuan heavy cruiser, the Malevolence is known for its immense ion cannons, which became a dire threat to the Republic fleet early in the Clone Wars. The cruiser's deadly two-step attack begins with knocking out the power systems of a target vessel with its primary weapon. Then the cruiser finishes off the defenseless spacecraft with blasts from its secondary laser cannons and turbolaser batteries.