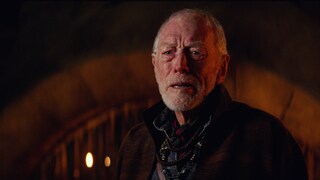 A legendary traveler and explorer, Lor San Tekka was a longtime ally of the New Republic and the Resistance. After the Battle of Endor, San Tekka helped Luke Skywalker recover secret Jedi lore that the Empire had tried to erase. He then retired to live simply on Jakku, where he followed the dictates of the once-forbidden Church of the Force. Leia Organa sent Poe Dameron in search of San Tekka, who gave him a portion of a map revealing Luke’s planet of exile. San Tekka was then killed by Kylo Ren, who sought the same information.