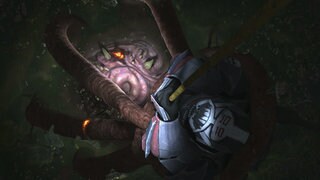 After Luke Skywalker, Han Solo and Chewbacca rescued Princess Leia from her cell on the Death Star, they sought safety in one of the battle station’s trash compactors. It was a perilous refuge: the garbage masher was home to a tentacled carnivore known as a dianoga. The slimy monster poked an eyestalk above the surface of the garbage to see what had invaded its abode and then attacked, dragging Luke under the surface to drown him so he could become a meal later. Fortunately for Luke, the dianoga let go of him and disappeared. Unfortunately for all of the rebel heroes, the creature fled because it sensed the walls were about to move, crushing anything in their path.