The female Terelian Jango Jumper has impressive acrobatics skills which came in handy as a thief in the Coruscant underworld. Cassie Cryar's main objective was to steal highly-sought after objects. By helping her partner Ione Marcy murder her boyfriend, the Trandoshan assassin Nack Movers, Cassie obtained one of the most valuable items in the galaxy -- a Jedi's lightsaber. Her desire to keep the lightsaber made her overconfident. She believed she could wield the same power as a Jedi. 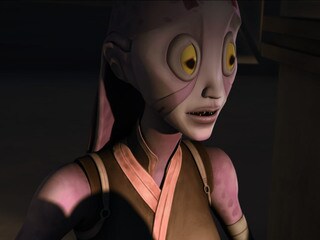 Ione's large eyes and small voice help her maintain her illusion of being an innocent witness to the crimes found in the deeper levels of Coruscant. Few would suspect her as a thief or accomplice to murder. Ione was a partner in crime to the nimble Cassie Cryar. When the two hoods managed to get a hold of a stolen Jedi lightsaber, they desperately tried to avoid the law. 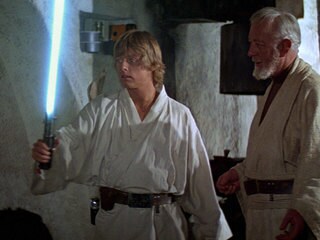 The lightsaber is the weapon of a Jedi, an elegant weapon of a more civilized age. It can be used to cut through blast doors or enemies alike. Using the Force, a Jedi can predict and deflect incoming blaster bolts, and reflect them.