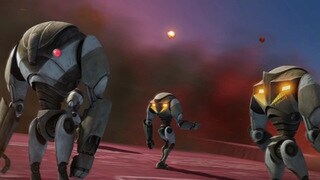 Often referred to as rocket droids or jetpack droids, B2-RPs are modified B2 super battle droids. The Techno Union engineered them to incorporate rocket pack and compact repulsorlift technology. They’re different from other B2s in other ways as well, including their blue and white markings on their torso, arms, and legs.

Both Maridun and Aayla Secura earned the spotlight in comic books long before their appearance in Clone Wars. Director Dave Filoni talks about how they ended up in the series.