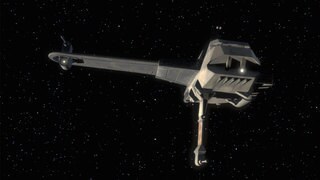 Anakin Skywalker and Ahsoka Tano escaped from Teth aboard the battered spice freighter Twilight, surviving a crash landing on Tatooine. Anakin had the ship salvaged and repaired for a number of reasons. He'd become fond of her, she'd proved surprisingly maneuverable, she offered Anakin plenty of opportunities for tinkering with machinery, and a nondescript freighter could prove useful on secret missions. While Anakin enjoyed tinkering with the Twilight, she proved difficult to keep spaceworthy -- as Obi-Wan Kenobi discovered when he borrowed the freighter to rescue Duchess Satine from captivity on Mandalore. The Twilight barely held together long enough to land, and was later shot down by Death Watch commandos. Obi-Wan and Satine escaped the crash, but the old freighter had finally met her end.