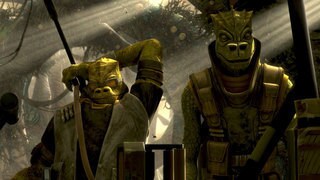 A world of thick jungle and forest, Trandosha is a hunter's paradise. Trandoshans (such as bounty hunter Bossk) are big game hunters, tracking and killing everything from deadly creatures to sentient beings. In the Clone Wars, Trandoshans abducted Jedi, Wookiees, and other species to hunt for sport. Jedi Ahsoka Tano herself was taken captive, but refused to be hunted as prey; along with other Padawans and new friend Chewbacca, they mounted a resistance and survived.