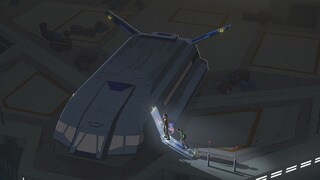 A small ferry craft, the star commuter shuttle was used to transport passengers on short trips between worlds. For the route between Lothal and Garel, it was piloted by RX-24, a droid that specialized in space travel. During the age of the Resistance, Jarek Yeager piloted such a shuttle to ensure a clandestine meeting between Poe Dameron and secret spy Kazuda Xiono happened far away from the Colossus platform. RX-24 was the pilot droid of the star commuter shuttle that traveled from Lothal to Garel.