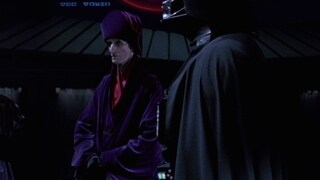 Sim Aloo was a skeletal looking human clad in flowing purple robes and wore an impressive hat. He served as one of Emperor Palpatine’s closest advisors during the time of the Galactic Empire. He traveled with the Emperor to the second Death Star to oversee the final stages of its construction over Endor. Presumably, he was still aboard when the Death Star was destroyed by the Rebellion.