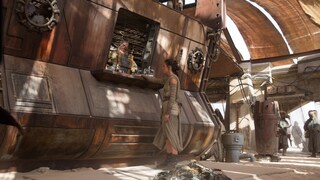 Jakku’s most significant settlement, Niima Outpost is little more than a bazaar, some hard-packed dirt that passes for a spaceport, and the compound of junk boss Unkar Plutt. The little settlement – named for its late founder, Niima the Hutt – is dominated by Unkar and his thugs, who control the market for salvage found by scavengers in the nearby Graveyard of Ships.