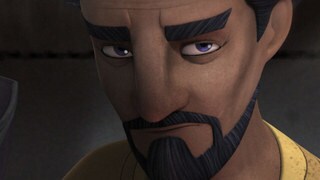 The father of rebel Ezra, Ephraim Bridger refused to bow to the Empire. He and his wife, Mira, were among the few on Lothal who stood up to Imperial occupation, and they were arrested for their efforts — leading to years away from their child. Even in custody, however, Ephraim and Mira would not surrender their freedom. Inspired by a galvanizing broadcast by their son, they led a revolt in an Imperial prison, sacrificing themselves to save others.