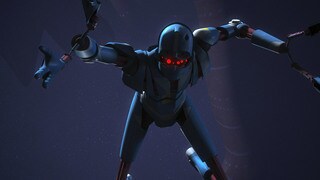 On the surface, a meek protocol droid. Underneath, a deadly assassin. E-XD infiltrator droids were used by the Empire to sweep Outer Rim worlds for rebel bases, and changed forms from standard robotic humanoid into towering, quick fighters. They were outfitted with an anti-capture failsafe -- an inner proton warhead that would detonate upon capture -- making them doubly dangerous.