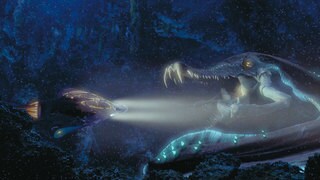 A powerful, aquatic carnivore lurking near Naboo's core. The monstrous animal has long jaws filled with pointed teeth. Its forelegs end in wicked claws, and sharp protrusions jut from its luminescent tail. The colo claw fish hides in underwater tunnels, where it sits motionless for hours until suitable prey passes by. When it spots a victim, the beast erupts from its lair and grabs the meal in its claws. Although quite fearsome, the colo claw fish is no match for the enormous sando aqua monster.