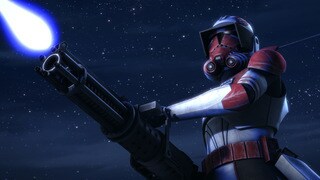 Clone Commander Thorn was a Republic soldier during the Clone Wars who led an escort of Padmé Amidala to Scipio. After nightfall, Thorn detected a coming Separatist assault, and acted fast to warn the Senator. With his Z06 blaster cannon (nicknamed the “Hammer”), he and his troops did what they could to hold off the attack. Battle droids closing in around him, Thorn unleashed a torrent of blaster bolts and a “For the Republic!” battle cry before falling valiantly.