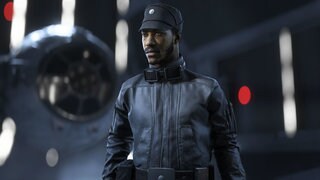 A graduate of the Arkanis Academy, Willard Waylin grew up with both a love of Imperial design and a knack for engineering. Though he liked nothing more than working on Imperial starships, he never wanted to fly, allowing him to bypass the competitive life of TIE pilot training to focus on becoming a mechanic. Recently assigned to the Star Destroyer Overseer, Waylin knows that Imperial strength sometimes comes down to the right wrench in the right hands.