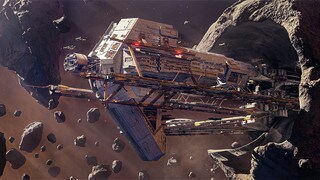 Built from salvaged Imperial Star Destroyers at a secret location, the Starhawk is a prototype New Republic battleship. It is designed to take on the Empire’s capital ships, finally giving the New Republic the ability to face Imperial fleets on equal terms. The Starhawk has heavy durasteel armor, deflector shields, multiple turbolaser batteries, and a tractor beam array with ten times the power of a Star Destroyer’s beam. The New Republic Senate has already voted to build three more Starhawk-class battleships, hoping to end the war as quickly as possible.