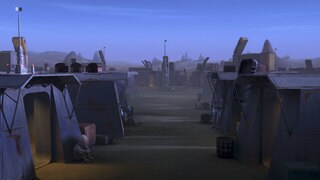 Tarkintown was a Lothal slum named for Grand Moff Tarkin. The inhabitants of the makeshift camp were forced from their farms by the Imperial commander; anyone who resisted was arrested for treason. The beleaguered group were grateful for any help they received, especially from a small team of rebels that fought back against the Imperial occupation.