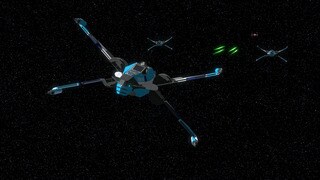 The New Republic T-85 X-wing fleet, painted in the distinct colors of the yellow and blue crest, flew missions including a fateful rendezvous between Kazuda Xiono and Poe Dameron that led to Kaz's mission on Castilon. The T-85 is the successor to both the classic T-65 X-wing flown by Rebel hero Luke Skywalker during the Galactic Civil War and the T-70 used by the Resistance.