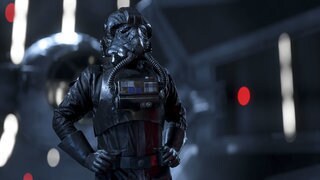 No one knows the true identity of the mysterious pilot known as "Shen". After being shot down and breaking his neck, Shen was reconstructed with Imperial cybernetics and never removes his helmet. Shen's enhancements allow him to survive battles and crash landings that would kill most TIE pilots, but at a cost each time. Though quiet and stoic, Shen nevertheless remains firmly loyal to the Empire that rebuilt him, and to his fellow Titan pilots.