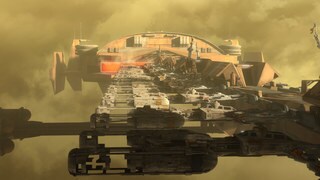 An Imperial salvage yard, Reklam Station was positioned in the atmosphere of the planet Yarma. The Empire used Reklam Station to turn old starships and vessels into scrap, often using slave labor to run its operations. The Ghost crew attempted to steal Y-wings from Reklam, but the mission did not go smoothly, and the station was destroyed.