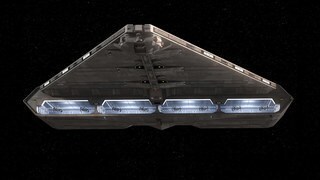 A massive starship, the Quasar Fire-class cruiser-carrier could both transport smaller fighters and act as a base. The Empire would use such ships in orbit of occupied worlds, allowing for easy dispatch of craft when needed. In one case, however, this proved to be a shortsighted tactic; the Ghost crew, alongside Cham Syndulla, stole the Quasar Fire-Class Cruiser-Carrier for the rebellion. With the rebel fleet badly in need of a base, this proved to be the next best thing.