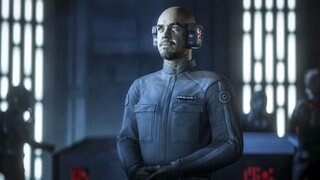 LT-514 started life as Obon Yandro, a low-level clerk for a manufacturing corporation. A chance series of events saw him mistaken for an Imperial intelligence courier while carrying classified blueprints. Though the mistake was short-lived, Obon showed a knack for intelligence work, and joined the Imperial Information Office. Enhanced with Aj^6 cybernetic implants, and renamed LT-514, he became fascinated by the data patterns of war… always at a distance. After Endor, a shortage of intelligence officers finally let LT-514 be a part of the action he’d studied for so long.