Stowaway on a Test Flight for Star Wars: Galactic Starcruiser

StarWars.com climbs aboard the new immersive experience for a glimpse at what’s to come when you book passage on the Chandrila Star Line.

The lightsaber jumps to life in my hands, illuminating a sense of purpose with its gentle hum. At first, the training droid goes slow, telegraphing the path of each simulated blast to give me time to deflect, then intensifying with speed.

But the real question is: can I do it with the equivalent of a blast shield over my eyes? My trainer, Disney Imagineer Sara Thacher, assures me I am strong with the Force, and the other passengers aboard Star Wars: Galactic Starcruiser gather behind me, shields at the ready to protect themselves should I fail. Then I calm my mind and just breathe.

My body remembers the lightsaber forms in a mix of muscle memory and, perhaps, the Force itself as instinct. With a glimmer of foresight, I can see what’s coming before the training droid fires, feeling the jolt of each successful defensive move as the hilt vibrates in my hands. 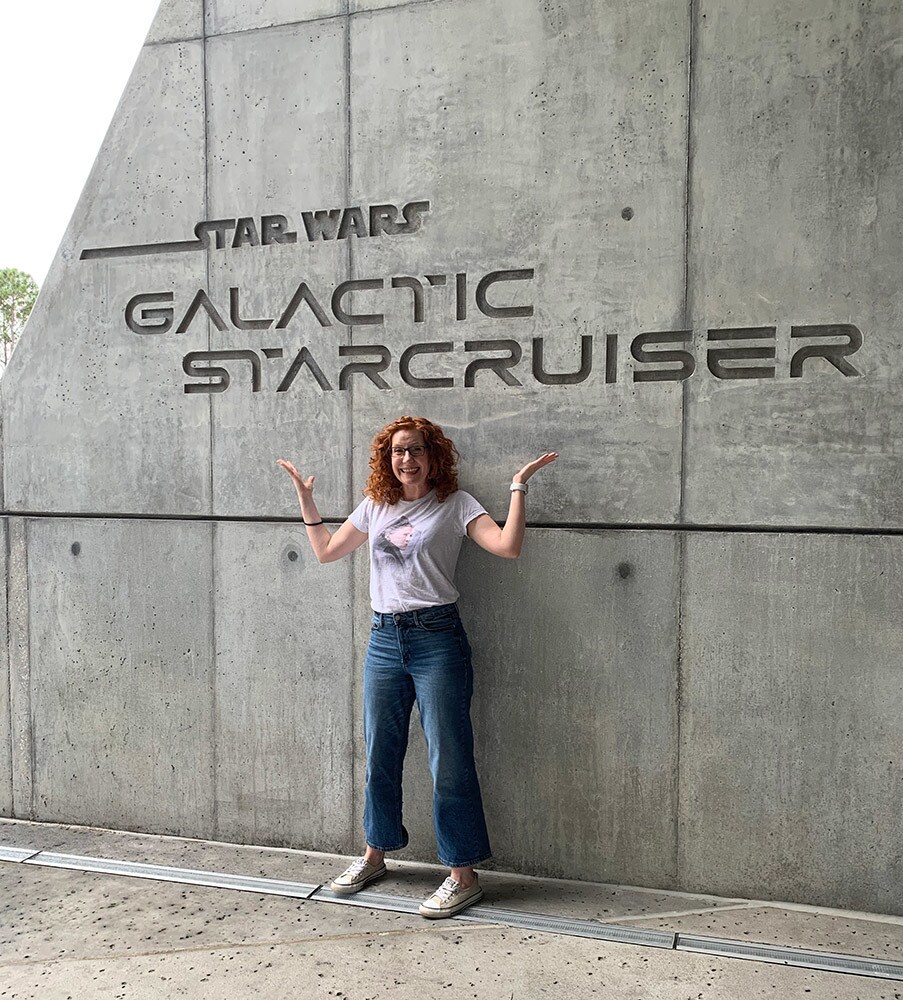 When I boarded the Star Wars: Galactic Starcruiser for an abbreviated play test last week, I expected to choose between the First Order and aiding the Resistance -- although the General Leia shirt I chose for the day tips my hand in terms of allegiance. But I never expected to feel like Luke Skywalker himself, taking my first steps into a larger world with the Force as my guide. That’s the magic of the new immersive two-day experience opening at Walt Disney World Resort in March 2022. If you’ve boarded a cruise ship or touched down on Black Spire Outpost, you have a sense of what to expect. But the reality is a unique, personalized adventure that takes you on a journey into a reality all its own as a passenger aboard the Halcyon starcruiser.

The terminal that welcomes you from the outside world is a non-descript earthy bunker, a portal of gray stone that seems to blend in with its surroundings. But the minute you step into the Launch Pod? That all changes. Through a viewport on the ceiling you’ll see yourself hurtling toward the sky, beyond the clouds, and to the stars where the Halcyon starcruiser awaits its next group of passengers. The play tests allow Imagineers a chance to see how an audience responds to the project, with a quick tour to give visitors on this trek an overview of the massive space before we're pulled into the action.

The central atrium connects to the main bridge, a plush oasis with red velvet benches. In one corner, a hologram emits the ship’s logo, a simple circle with two slash marks bisecting the continuous line. Although signs of construction lingered during my visit, the effect of earthly displacement was still palpable. Gazing out the main viewport at the planet below, ships buzzing around nearby undoubtedly gathering other passengers, is quite a sight. Then you begin to feel the gentle tug of motion. The stars outside pass by as the ship begins its journey. And even though you know your eyes can deceive you, you would swear you’re moving through space.

The ship’s 100 passenger cabins form the spine of the ship, accessible from the four decks that are designated for passengers. The rest of the 13 decks are for crew members only -- unless, of course, you can talk your way into a special mission as a new Resistance recruit. The bunks appear small in photos, but a six-foot-tall passenger can comfortably lie down in one of the capsule-like sleeping quarters. On an opposite wall, a standard double bed is bolted to the wall, with space for luggage to be stowed beneath and a simple table with two stools below the viewport, an ever-changing view of the stars with a blast shield that can be lowered when it’s time to rest.

On a quick tour, we glimpse the lightsaber training room, the brig, and get directions to a climate simulator, a courtyard where you can begin to acclimate to the weather conditions at the ship’s first port of Batuu. The dining hall looks almost exactly like the concept art, with more velvet seating in plush blue-green, gold accents, and stunning lighting fixtures that look like something straight out of the glittering world of Canto Bight. When we duck our heads into the Sublight Lounge, it feels like we’ve stepped foot onto a more relaxed version of Dryden Vos’ luxury yacht. In one corner a working holotable sits ready for a friendly game of sabacc while behind the bar swirling carafes of colorful beverages are ready for sipping.

Then it’s time for muster.

On this particular day, to the crowd in the atrium the ship’s captain, Riyola Keevan, appears human, although her kind eyes shine through. She carries herself like someone who would be willing to protect her ship and the people aboard at all costs. Assistant cruise director SK-62O whizzes by, an astromech on a mission. And the First Order is already making its presence known, as Lt. Croy and two stormtroopers pace around taking part in light interrogation techniques.

There’s so much activity that my eyes don’t know where to focus until I see a familiar swatch of brown concealed behind a support beam on the deck just above. Chewbacca has arrived, taking refuge as a stowaway. When he opens his mouth, a cacophony of Wookiee howls and chortles emits from his safely masked features. Word quickly begins to spread that we must help hide Chewie from the First Order, and I spring to action, stretching my arms out as nonchalantly as possible to extend my five-foot-five frame while the Wookiee tries to make himself small behind a wall of like-minded passengers. Working together, we manage to sneak him out of the atrium while another guest distracts the First Order with questions. And safely in a corridor we learn the language of the Resistance, a passcode that will help identify others along our journey. “Ignite the spark,” the captain says, and we respond in unison, “light the fire.”

Bridge training is next on the itinerary, a team sport that requires passengers of all ages to belly-up to a console and learn how to operate the shields, loader systems, and weapons in case of an emergency. My partner and I quickly become competitive even during the training exercise, taking the potential for a life-or-death situation very seriously.

It’s lucky we do, because the practice is interrupted by a First Order blockade, calling for an intervention by all those present.

We use our recently acquired skills to blast our way out of there and make the jump to hyperspace. It’s an unexpectedly awe-inspiring feeling to be standing on the bridge of a starcruiser when it makes that leap into the starry abyss. Even if you’ve experienced it second-hand in a movie theater or even first-hand safely strapped in on Star Tours or Millennium Falcon: Smugglers Run, neither can adequately prepare you for this moment. The blue streaks of hyperspace whiz by, reflected on your face as you stare up at them from the bridge. There’s no question that you are in the story, living out all your dreams of stepping into the Star Wars galaxy.

After a successful mission to send a message on a Resistance relay, despite an impossibly dangerous asteroid field and a nefarious First Order Probe Droid that sends us all ducking our heads below the console to avoid detection, it’s time to return from where we came. But the First Order is waiting, and the paramilitary group swiftly takes over, escorting us from the bridge.

“At Disney, so often you're used to seeing massive scale, yet this is an incredibly intimate experience,” says Ann Morrow Johnson, the Disney Imagineer who serves as executive producer and creative director of Star Wars: Galactic Starcruiser. “There are only 100 cabins and we've got lots of characters onboard the ship. And because we want it to feel like that elevated intimate experience where you really get to connect with the characters onboard, you have that personalized service from the crew members. You feel like this is an adventure that is happening to all of you as a community. This whole adventure is kind of befalling you together over the course of those two days.”

Our next assignment takes us into the bowels of the ship to manage the engineering systems in an effort to prevent Lt. Croy from taking control. The room feels like an Earth-bound boiler room, with additional lights, levers, and buttons. As my eyes adjust to the dimly lit room and I try to figure out what to tackle first, a crew member thrusts a hydrospanner into my hands and I get to work opening and closing some essential valves.

Faced with a series of puzzles just waiting to be solved, we move around the room comforted by the thrum of the engines and the occasional puff of smoke, turning angry red lights into serene white beacons with the right sequence of switches and levers.

In the coolant room, we learn to work together as some of the switches must be moved in unison at a distance too far for any human to reach. A young Jedi appears and, although I don’t catch his name, we wordlessly work together to throw the massive switches, resulting in a satisfying hiss, to keep things flowing. You can always trust a Jedi.

One with the Force

Afterward, my group is sent to the lightsaber training room.

At first, we all take turns using the practice sabers to deflect the training droid’s blaster fire, our small group cheering each other on. As the lightsaber ignites the hilt vibrates, coming alive with a shaft of light to be used only for defense. The weapon feels surprisingly light in my hands.

When the training droid intensifies the exercise, sending bolts firing off more rapidly in all directions, we’re handed special deflecting shields. Using the same lightsaber forms, the shields quickly become invaluable tools to protect those who are unarmed at the back of the room.

After some success, it’s my big mouth that results in the final test: deflecting simulated blasts using only the Force. I’m so confident and vocal that the trainer plucks me out of the crowd to demonstrate for the rest of the class, and for a moment I wonder: what have I done?

This is how I end up with the rest of the team gathered behind me, shields up and at the ready should I fail. I don’t know if I say it out loud or if the words simply echo in my mind, but with this reminder I raise my weapon: “I am one with the Force…and the Force is with me.”